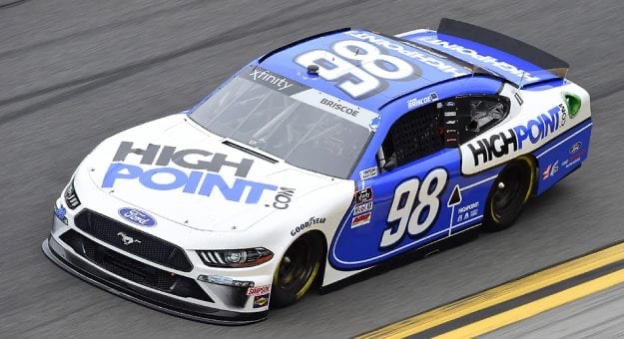 The 90 lap race began with Noah Gragson on the poll due to the random draw. It would only be one turn before the first caution came out after Austin Cindric made slight contact with Truck Series winner Brandon Jones sending the No. 19 Toyota into the inside wall and an early exit. It would. It be the last early caution as Josh Williams would bring out the second after hitting the wall on the restart following contact from Daniel Hemric. Those cautions would leave NASCAR to scrap the lap 10 completion caution.

Harrison Burton would get loose on lap 15 and crash his car into the inside wall bringing out the third caution of the day. A 21 minute red flag delay followed. Austin Cindric would win the first stage as Alex Labbe who was one of the Dash 4 Cash drivers spun and hit the inside wall in the final lap of the stage. Playing out strategy Ross Chastain did not pit and took the lead but with four to go Justin Allgaier, on new tires, would reel him in for the lead and Chastain would make a scheduled pit stop prior to the stage ending. Several others would follow him into the pits before the stage ended. Allgaier would hang on for the second stage win.

Early in the third stage the lead was contested between Chastain, Cindric and Allgaier. With 42 to go Riley Herbst was spun by Justin Haley on the front stretch tuning out yet another caution. Haley and his crew chief were invited to speak to NASCAR following the race and was also penalized two laps.

Gragson, Cindric and others would be involved in the next incident. With 22 to go Briscoe, the race leader, spun after blowing a left rear tire but was able to avoid further damage but brought out a record setting eighth caution in the process.

Briscoe would need just a couple laps to work his way back up to third behind Myatt Snider and Chastain. The inability for Chastain to quickly get around Snider would allow Briscoe to reel both in with 14 to go. With seven to go Briscoe would be shown as the leader ahead of Chastain.

With six to go Chad Finchum brought out the ninth caution of the day setting up a battle again between Briscoe and Chastain in overtime. Chastain would get the lead briefly but Briscoe would apply the bumper to get back into the lead and claim the win.