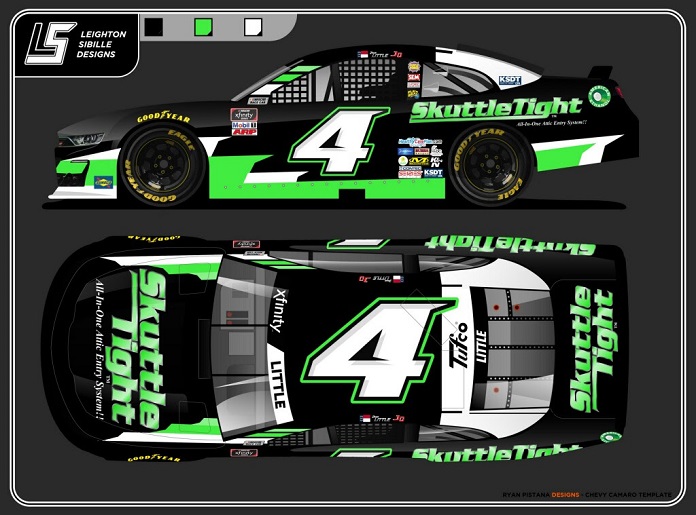 As a longtime partner with Jesse on the truck side, Skuttle Tight jumps over as primary sponsor for Jesse this weekend at Talladega Superspeedway in the Xfinity Series.

Skuttle Tight is a manufacturer of easy to install attic access doors and hatches for either new homes, or the retrofit of existing homes, that are insulated and sealed to prevent heat loss.

Chad Kompelien President Skuttle Tight said of the continued partnership, “We are excited to make our debut in the Xfinity Series with Jesse and JD Motorsports and our first super speedway partnership” “Jesse continues to do a great job in his rookie season in the Xfinity series and we looking forward to another a good run at Talladega.”

Last weekend’s double header at Miami-Homestead was an all around success for Jesse and the JD Motorsports team. Without being able to qualify starting positions are being determined by draw. Race one, Saturday Jesse rolled of 16th and race two on Sunday Jesse started from the 18th position. These were great starting spots at a track where passing is tough.

After round 2 of Homestead Jesse said ” We started off strong and made some good adjustments. The guys did a great job on pit road today. Flawless stops. All in all just a solid effort. I felt we learned a lot. Ran up against the wall. Got into the wall. I learned from that.” Jesse finished with “We’re getting stronger and we’re looking forward to the rest of the year.”

If you missed the videos on Facebook this week where Jesse spoke with Shriners Patient Ambassador Theodore go back and check them out! Meeting with the ambassadors has been a highlight of the season for Jesse.

Without fans in the stands and the pits that took away the opportunity to bring the Ambassadors to the tracks to visit with Jesse and talk about the Shriners and their mission. To overcome that obstacle, and until fans are allowed, Jesse will be meeting with Shriners Ambassador Patients virtually to learn about them and share their story how Shriners has supported both the patients and their families.