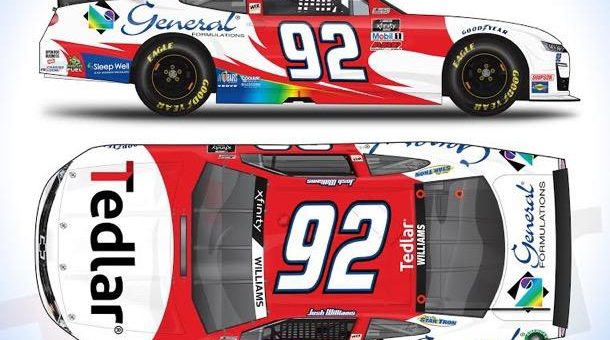 A business-to-business relationship with one of Josh Williams’ longest-tenured partners has led to a unique sponsorship deal for Saturday’s NASCAR Xfinity Series event at Talladega (Ala.) Superspeedway.

General Formulations, a worldwide manufacturer of high-quality pressure-sensitive films for the sign and graphic industries, is leveraging a strategic partnership with DuPont™ Tedlar® PVF films to back Williams’ No. 92 Chevrolet Camaro in the Unhinged 300 at the 2.66-mile superspeedway.

General Formulations and DuPont™ Tedlar®, the company’s polyvinyl fluoride film for graphics protection, will serve as co-primary sponsors of Williams during the 11th event of the NASCAR Xfinity Series season.

Founded in 1953 and based in Sparta, Mich., General Formulations has been part of Williams’ ascent into NASCAR’s national series since his debut in the Xfinity Series in 2016. This season marks their fifth year as a partner with the 26-year-old, who is in the midst of a career year in Xfinity Series competition.

“We have been a proud wrap vinyl sponsor of Josh Williams Motorsports since 2016. Our longstanding relationship with Josh has given us an opportunity to grow our brand and align ourselves with a highly reputable driver and sport,” said Matt Edwards, Product Manager for General Formulations. “Our new GF 333 AutoMark™ DRIFT™ PW high-quality vinyl wrap film will be used to wrap Josh’s No. 92 car at the upcoming Talladega race.

“The graphics on the car will be highlighting our new strategic partnership and co-sponsorship of the upcoming race with DuPont.”

As part of General Formulations’ association with Tedlar®, the two brands have worked to produce a long-term graffiti and chemical resistant solution that can be used for a multitude of applications, including outdoor signage and UV-resistant graphics.

Through the Tedlar® partnership with General Formulations, Williams will become one of a select group of drivers to work with the brand in NASCAR when he takes the green flag at Talladega this weekend.

The Tedlar® brand will be featured on Williams’ Camaro. Tedlar® polyvinyl fluoride film provides surface protection for a variety of materials and industries, including aerospace and transportation, building and construction, signage and graphics, wallcoverings, healthcare and photovoltaics.

Williams is returning to Talladega, the site of his career-best eighth-place finish last April, on the heels of his third top-12 finish in 10 races this season last weekend at Atlanta (Ga.) Motor Speedway.

He currently sits 13th in the Xfinity Series playoff standings, just 17 points out of a postseason berth, but Williams’ eyes aren’t just on collecting points this weekend – they’re on locking himself and his DGM Racing team into the playoffs with a breakthrough victory at the largest track on the circuit.

“After how we ran at Talladega last year and knowing the speed we’ve had already this season, I’m fired up to get back there this weekend and see if we can’t go a few spots better and win the race,” said Williams. “We know that the superspeedways give our team a real chance to shine and run up front, and hopefully we can take advantage of that and build on the momentum we’ve had the last few weeks.

“It’s really cool to be able to welcome a partner like Tedlar® to DGM Racing this weekend and to have them be on board alongside General Formulations, who’s been with me for this entire journey,” Williams added. “We’re ready to represent for them at Talladega and keep this great-looking No. 92 General Formulations/Tedlar® Camaro toward the front of the field.”