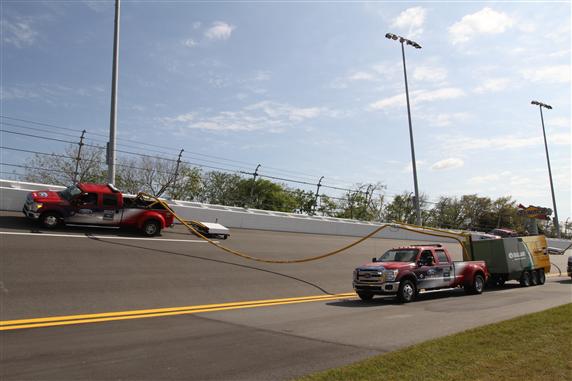 On Tuesday NASCAR made two big announcements regarding the 2014 season. First, it released the 2014 NASCAR Sprint Cup series schedule. It also announced that its revolutionary track drying system called, ‘Air Titan’ will be available at every NASCAR Sprint Cup Series race weekend throughout the 2014 season.
“This season has delivered plenty of drama and excitement, and we’re anticipating even more for our fans in 2014 now that the Gen-6 car has competed at every track,” said Steve O’Donnell, senior vice president of racing operations.”

“Having the Air Titan at each NASCAR Sprint Cup Series weekend allows us to meet a very important goal set by our Chairman and CEO, Brian France: to drastically decrease track-drying time to the best of our ability and ensure our fans in the stands and those watching on TV get to see each race on its scheduled day.”

‘Air Titan’ was developed in house at NASCAR’s R&D Center, it then progressed quickly following France’s directive to improve the racing product and fan experience in every form. Following testing in the summer and fall of 2012, Phase 1 of the technology was on-site at Daytona International Speedway in February. The 2012 Daytona 500 was the first to be postponed to the following day because of inclement weather.
‘Air Titan’ debuted at Martinsville in April where it successfully decreased drying time in order to hold NASCAR Sprint Cup practice rather than have it cancelled. Air Titan’s biggest save to date was at Talladega Superspeedway’s rainy spring races where it shaved nearly an hour off drying time for both the NASCAR Nationwide and NASCAR Sprint Cup Series races, allowing those events to be completed on their scheduled days. It also was in use Oct. 3 at Kansas for track conditioning purposes while also trimming nearly 45 minutes from drying time prior to the Goodyear zone tread tire test.