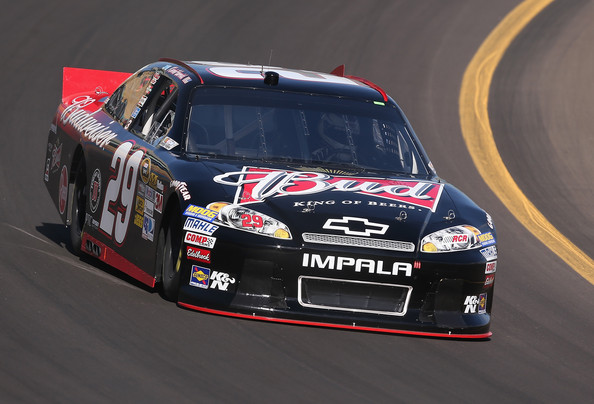 The story Sunday at Phoenix International Raceway was the crashing of Jimmie Johnson into turn four. The wreck removed Johnson as the Sprint Cup Series points leader while his competition Brad Keselowski contended for a win.

Kyle Busch started on the pole and jumped out to the early lead. Martin Truex Jr. who started the race along side him began losing speed on lap 7 and by lap 11 headed down pit road. Championship contenders Brad Keselowski and Jimmie Johnson started 12th and 24th.

The first caution came on lap 17 when Mike Bliss slid up the track and made contact with Timmy Hill. Bliss then made contact with the wall and went to the garage. Both Johnson and Keselowski pitted under the ensuing caution, Keselowski lost multiple spots after stalling his car on pit road.

Caution waved again on lap 52 when David Gilliland wrecked. On pit stops Mark Martin would take only two tires and grab the lead. It did not take long before Busch reclaimed the spot. Late in the run Denny Hamlin would pass Busch for the lead. During the next round of pit stops Keselowski led a lap to get his bonus point.

Johnson hit the wall in turn 4 on lap 235 sending him to the garage. The green flag waved again on lap 241, Busch again leading the restart with Hamlin on his tail. Keselowski followed in third and had a decision to make whether to press the issue to go for the lead or stay safe knowing Johnson was in the garage.

Keselowski decided to play it safe and stay back in third position.

Lap 272, David Ragan hit the wall in turn 3 bringing out the fifth caution of the race. Busch once again took the restart. It wasn’t until lap 304 that Kevin Harvick tried to challenge Busch for the lead. On lap 305, Clint Bowyer slid up the track pushing Jeff Gordon into the wall but avoided the caution. By lap 310, Harvick cleared Busch.

A few laps later, Gordon retaliated against Bowyer, wrecking both cars in between turns 3 and 4. A fight broke out between the two teams in the garage. After the fight was broken up, a very angry Bowyer sprinted to the No.24’s hauler where he was stopped by NASCAR.

Gordon’s retaliation occurred just ahead of Keselowski who had been warned by his spotter that Gordon was waiting to retaliate against Bowyer.

Harvick was in the lead when the caution came out, the team argued the white flag had been thrown prior to the caution but replays showed that it had not. The race was put under red flag while they cleaned up the track.

On the final restart with two laps to go Harvick and Busch challenged each other for the win. Danica Patrick spun behind the leaders but no caution was thrown, seconds later as Harvick crossed the line to win the race a whole group of cars started to wreck.

Keselowski is now the points leader going into the final race of the Chase next weekend at Homestead Miami Speedway. Keselowski holds a 20 point lead over Johnson. All others have been eliminated from contention.