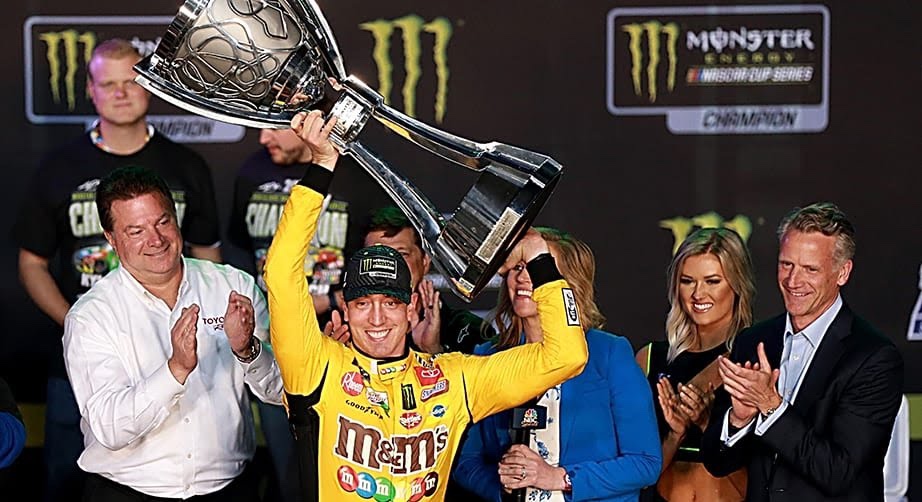 Kyle Busch viewer winning the championship this year as a way to validate his 2015 title which some feel came with an asterisk as Busch missed several races following a crash in the Xfinity Series race at Daytona which caused him to miss several events at the beginning of the season.

Busch rebounded and went on to win the title that year. After winning the regular season championship this year Busch used points accumulated during those races to advance though the rounds into the championship race as he struggled to score wins. That all changed on Sunday in the Ford EcoBoost 400.

“We have a great race team and a great owner,” an emotional Busch said after climbing from his car. “Everybody always says you never give up and we’re no different,. Sometimes we may not be the best, sometimes we may not have the right track position. Today we had a really good car and I could race around and move around.

Busch was not alone in tying the two title wins together.

“We had a cold spell there,” crew chief Adam Stevens. “It’s been well-documented, believe it or not. Quite a few questions about it. Felt a little bit like 2015 to me. Take the broken legs out of the equation. We were hot early in 2015 when Kyle came back. We didn’t win since Indy that year, then came to Homestead and got the job done.”

Busch became the 16th driver in NASCAR history to score multiple titles. He joins Jimmie Johnson as the only active members on that list.