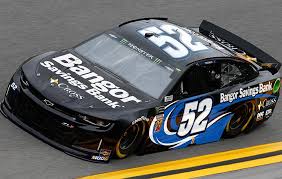 Austin Theriault will return to the Monster Energy NASCAR Cup Series this weekend for the running of the Federated Auto Parts 400 at Richmond Raceway.

Theriault will be driving the No. 51 Ford Mustang of Rick Ware Racing. Appearing on the car as a sponsor will be Jacob Companies with Bangor Savings Bank serving as an associate sponsor.

“It has taken some time, but we’re starting to build some amazing momentum. I’m really happy that Bangor Savings Bank is continuing to support us and will be part of every race from now until the end of the year. That’s very critical,” Theriault said.

Theriault said he will drive in at least three of the final eight races after Richmond, but which races those will be have not be finalized.