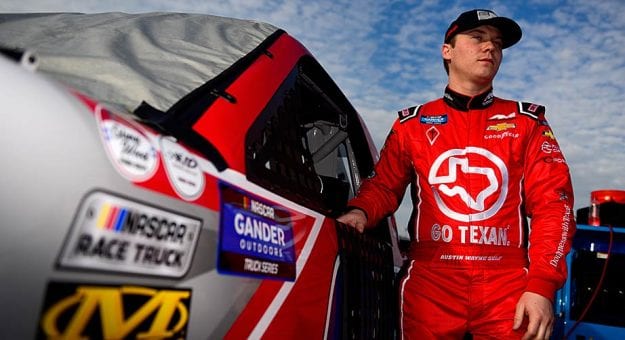 NASCAR on Tuesday lifted the suspension of NASCAR Gander Outdoors Truck Series driver Austin Wayne Self, who has successfully completed NASCAR’s Road to Recovery Program after a violation of the sanctioning body’s substance abuse policy.

NASCAR announced April 1 that Self had been suspended indefinitely. The 23-year-old driver was required to complete the Road to Recovery Program before reinstatement and receiving clearance to resume competition.

Self has made 66 career starts in Gander Trucks competition, with a best finish of second place in the 2017 season-opening race at Daytona International Speedway. He had made three appearances this season for AM Racing — the Gander Trucks organization owned by his father, Tim — before his suspension.

Monster Energy Series regular Bubba Wallace filled in driving the AM Racing No. 22 Chevrolet at Martinsville Speedway and Texas Motor Speedway while Self was sidelined.

The Gander Outdoors Truck Series’ next race is scheduled Friday (5 p.m. ET, FS1, MRN, SiriusXM) at Dover International Speedway. AM Racing’s No. 22 is on the preliminary entry list for the JEGS 200 with the driver to be announced.