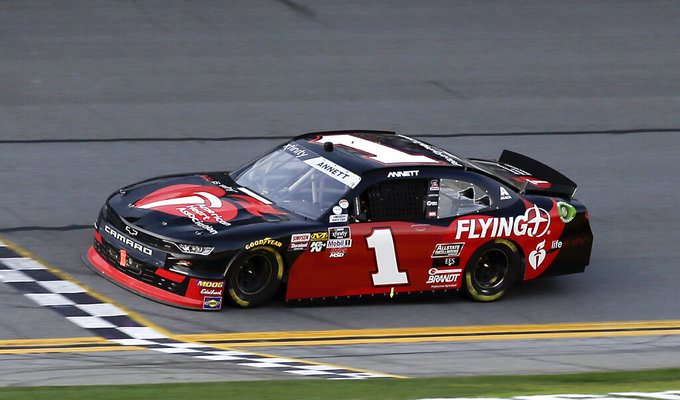 For the third straight race weekend, the NASCAR Xfinity Series Dash 4 Cash program is raising the stakes with a $100,000 bonus on the line for series championship qualifying contenders. And for this weekend, those four drivers are Cole Custer, Austin Cindric, Justin Allgaier and Tyler Reddick.

So far this season, Christopher Bell banked the first $100,000 bonus with his win at Bristol Motor Speedway a few weeks back, and then Cole Custer fattened his checking account with his victory at Richmond Raceway two weeks ago.

Now the series turns to Talladega Superspeedway as the stage for the next showdown in the Dash 4 Cash competition, the MoneyLion 300, this Saturday, April 27 at 1 p.m. ET on FS1, MRN and SiriusXM NASCAR Radio.

Team Penske’s Austin Cindric is right behind Custer in the championship standings (fourth) after posting three top fives and six top 10s this season. Cindric is looking to rebound from his series track debut at Talladega last season where he started 11th and finished 30th after being involved in a multicar incident on Lap 62. Cindric has reason to be optimistic though, he finished fifth in the season-opener at Daytona.

JR Motorsports driver Justin Allgaier and the No. 7 team will be driving with heavy hearts this weekend, as team owners Dale Earnhardt Jr. and Kelly Earnhardt-Miller’s mother, Brenda Jackson, passed earlier this week. Brenda joined Kelly and Dale at JRM in 2004.

Allgaier is currently fifth in the points after grabbing three top fives and four top 10s this season. Allgaier is a force to be reckoned with at Talladega, he is currently riding a six-race top-10 streak; that includes a third-place finish last season. And the Illinois native has the series-best average finish (10.0) at the famed high banks among active drivers with more than one start.

Richard Childress Racing’s Tyler Reddick continues to prove why he won the title last season. The Californian is the current standings leader after putting up a series-leading six top fives and seven top 10s in the first eight starts of 2019. His average finish this season also leads the series at 5.4. Reddick has made two Xfinity starts at ‘Dega posting one top-10 finish (eighth, last season) and an average finish of 14.0.

Sunoco Rookie Update: John Hunter Nemechek takes the rookie standings lead
One driver feeling particularly optimistic this weekend has to be GMS Racing’s Sunoco Rookie of the Year contender John Hunter Nemechek, who not only took the rookie standings lead following Richmond two weeks ago, but now heads to Talladega this weekend with the defending race winning team from this event a year ago.

Last season, GMS Racing’s Spencer Gallagher grabbed his first and only career series win in this event at Talladega, driving the GMS Racing flagship No. 23 Chevrolet Camaro. Fast forward to this season, and now John Hunter Nemechek heads to Talladega to attempt to match his new team’s efforts from a year ago.

Through eight races this season, Nemechek and the No. 23 GMS Racing team have gelled quite well, he is currently sixth in the points standings after posting two top fives and six top 10s.

Nemechek made his series track debut at Talladega last season while driving part-time for Chip Ganassi Racing; he started fourth and finished a respectable seventh.

Joe Gibbs Racing’s Christopher Bell might have two wins this season, but he also has three finishes of 13th or worse; including a 30th-place DNF at ISM Raceway.

The persistent ups-and-downs Bell has endured have opened the door for current standings leader Tyler Reddick – who has been the model for consistency this season, leading the series in top fives (six) and top 10s (seven). His only finish outside the top 10 this season was 14th at Las Vegas.

Reddick has made two Xfinity starts at Talladega, accumulating one top-10 finish (eighth, last season) and an average finish of 14.0.

Moffitt will be the sixth different driver to jump in the No. 8 this season joining Chase Elliott, Ryan Preece, Ryan Truex, Jeb Burton and Zane Smith. This weekend Moffitt will be paired with crew chief Taylor Moyer.

Though Moffitt only has two series starts to his career, he made his NASCAR Xfinity Series debut at Iowa Speedway in 2011, where he started 10 and finished ninth driving for car owner Robby Benton. His second and most recent Xfinity start came in 2017 driving for GMS Racing – he started 21st and raced his way up to a 11th-place finish.

Moffitt has only made one NASCAR national series start at Talladega, last season in the Gander Trucks he started eighth but finished 17th, two laps down.
Xfinity Stats Snapshot: Talladega Superspeedway
Below are some quick stats to get you up to speed for this weekend’s NASCAR Xfinity Series race the MoneyLion 300 at Talladega Superspeedway (April 27 at 1 p.m. ET on FS1, MRN and SiriusXM NASCAR Radio):