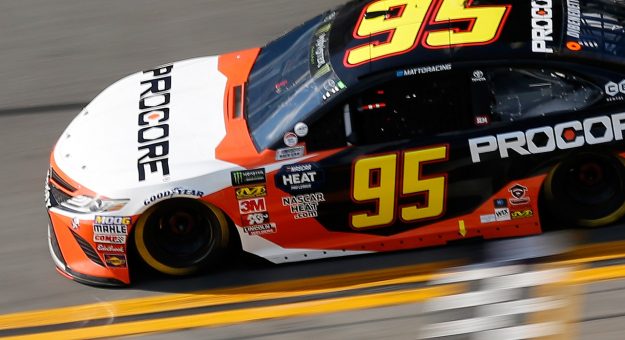 Leavine Family Racing’s Matt DiBenedetto shows up at Talladega Superspeedway this week feeling perhaps the most optimistic he’s been before a big race. And that’s largely because of his showing in NASCAR’s biggest race – the season-opening Daytona 500.

DiBenedetto led a race-best 49 laps at Daytona and was running up front – fourth – in the waning laps when he was collected in a 21-car pileup with nine laps remaining in the scheduled 200-lap race. He finished 28th, but certainly left the track feeling more accomplished than that score would indicate.

His 49 laps out front in his first race with the No 95 Leavine Family Racing Toyota Camry team was more than double his previous career total (23 laps). And the 2.66-mile Talladega high banks has historically been another positive venue for DiBenedetto. He’s led laps in the previous three races there and with the LFR Toyota and Joe Gibbs Racing team alliance behind him for Sunday’s race, DiBenedetto may well be set for a career-best showing. His previous best is 18th-place – twice – in the spring of 2015 and 2017. Two of his four career top-10 finishes have come on big tracks. He was ninth in the 2017 Daytona 500 and eighth in last year’s summer race at Daytona.

This season’s best finish for DiBenedetto is 12th at Bristol Motor Speedway three weeks ago.