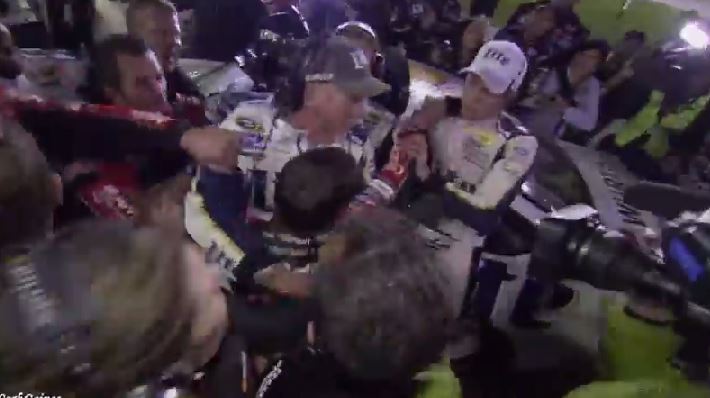 Brad Keselowski is the center of attention again after a late race incident involving Jeff Gordon.

On the first green-white checkered attempt, Gordon who was leading chose the outside line with teammate Jimmie Johnson starting inside. Keselowski made contact with Gordon’s left side, puncturing his tire. Gordon slipped back through the field, before spinning his car out.

Johnson would go on to win the race. His first win since Michigan earlier this year. Keselowski finished second, followed by Harvick, Kyle Busch and Jamie McMurray.

After the race Gordon approached Keselowski. The two talked for a few seconds before Kevin Harvick came up from behind Keselowski and pushed him. Harvick set off a brawl that left both Gordon and Keselowski bloodied.

Speaking after the race Gordon made it clear he was not happy with Keselowski.

“He’s a dipshit… I am not sure how he ever won a championship.” said Gordon. “I am sick and tired of him.”

Gordon went on to say that he was glad that Johnson won the race and “that you know what” did not.

Gordon entered the race as the points leader and left in fourth, 1 point ahead of the cut off.