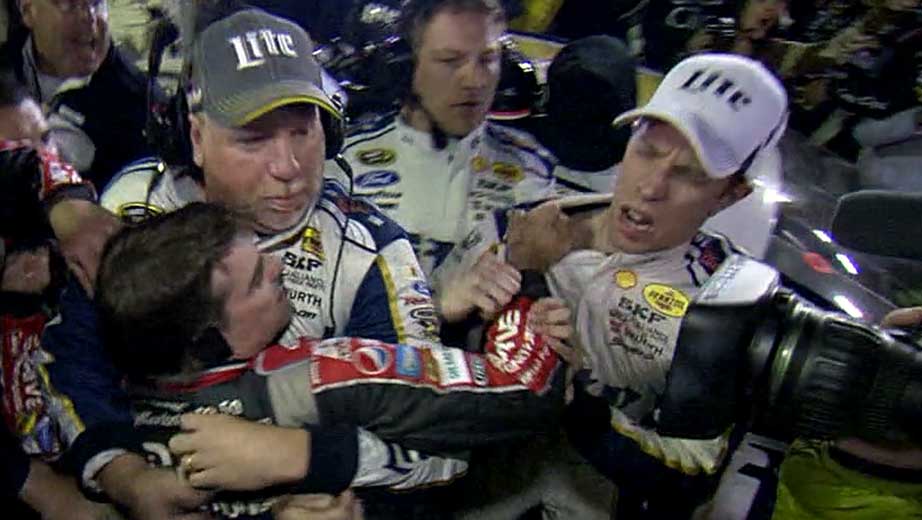 NASCAR to review brawl, “You shouldn’t punch somebody”

NASCAR will review the film of a post-race fight which involved Jeff Gordon, Brad Keselowski and a number of crew members following the AAA 500 at Texas Motor Speedway on Sunday.

According to Robin Pemberton, NASCAR’s senior vice president of competition and racing development, there is no issue with the racing between Keselowski and Gordon which led to the No. 24 car losing a tire and spinning out.

“I think it was hard racing, and this is a contact sport,” Pemberton said of Keselowski’s charge up the middle to get around Gordon.

“You look at what drivers are trying to do. We had a couple shots at a green-white-checkered finish, and everybody was going for it. Nobody was leaving anything behind.”

Of course the issue for NASCAR is what happened after the race and when drivers got out of the cars.

“We’re going to take our time. We’ve got a lot of film to review and things like that. The important thing is to make the right decision at the end of the day.”

Pemberton made it clear that NASCAR was not happen with the post race brawl.

“You shouldn’t punch somebody,” he said. “Everybody gets together, and when you’re holding onto each other and grabbing and this, that and the other, that’s one thing. When punches are landed, that’s a different scenario…”

The final race of the Eliminator Round will take place on Sunday at Phoenix International Raceway.