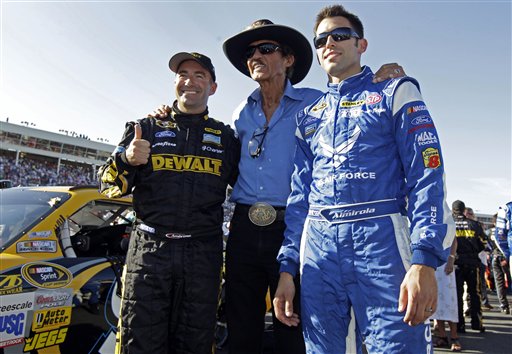 Richard Petty Motorsports has re-signed both of its NASCAR Sprint Cup Series drivers. Marcos Ambrose will return to drive the No. 9 Ford Fusion while Aric Almirola will drive the No. 43 car during the 2013 season.

This will be the third year at RPM for Ambrose. The 2013 season will make the second year at the team for Almirola.

“It’s good to come back to Richard Petty Motorsports and focus on our future together,” said Ambrose. “We had success this year and recently have made plans to get better for 2013 and beyond. It was great to win at Watkins Glen, earn my first two poles and also have the opportunity to make the ‘Chase’ this year. I think the Petty organization, and this No. 9 team under the leadership of ‘The King,’ Sammy (Johns) and Drew (crew chief Blickensderfer), is going to be even stronger next season. I can’t think of a better place to be and am ready to win.”
In addition to their Sprint Cup Series teams, RPM will continue to field the No. 43 Pilot/Flying J Ford in the NASCAR Nationwide Series with driver Michael Annett. Annett is currently fifth in the Nationwide Series championship.