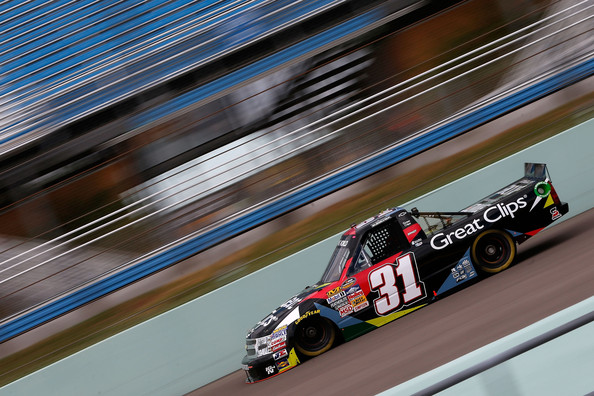 Three drivers started the race at Homestead with the hope of leaving the race as the 2012 champion. James Buescher entered Friday nights race at Homestead-Miami Speedway with an 11 point lead in the Camping World Truck Series over Timothy Peters. Ty Dillion was  in third, 12 points out.

With two laps to go, Dillion was making a charge for the lead. He had worked his way up to being within 1 point of Buescher for the championship title, when things went wrong. Kyle Larson dive bombed Dillion sending them both wrecking. The crash brought out a red flag with 2 laps to go.  Ryan Blaney was also involved in the crash.

Blaney was checked at the infield medical center and released.

For Buescher it was redemption after losing the title last season to Austin Dillon. Buescher lost that title, in part, to his failure to qualify for the early season race at Phoenix.

Kyle Busch led off the green white checker, but Cale Gale gave him a run for his money on the last lap. Gale and Busch bumped and door slammed to the checkered flag – but Gale had the run on the bottom and won the race.  It was Gale’s first win.

Busch was asked what he thought of the lap tango, he replied, “It doesn’t really matter.”

Buescher held off Peters to win the 2012 Camping World Truck Series Championship. He won 4 races (Kansas, Chicago, and both Kentucky races) this season and finished inside the top-ten in 14 of his 22 starts. Buescher finished the race in 14th.

If the name Buescher sounds familiar it is. James is the cousin of Kris Buescher who recently won the ARCA Series title.

Parker Kligerman started on the pole for the race with Kyle Larson along side him.

Full Results for the Ford EcoBoost 200