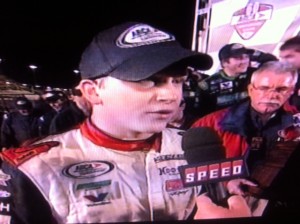 Chris Buescher captured the 2012 Menards ARCA Series championship. Buescher finished ahead of Frank Kimmel who was vying to win his ninth series title. The 19-year-old Buescher became the first driver to complete every scheduled lap in the series.

The cousin of NASCAR Camping World Truck Series driver James Buescher, Chris is signed to a developmental contract with Roush Fenway Racing. Buescher finished tied with the series lead in wins with Alex Bowman. Bowman won his fourth race of the season in Friday nights race at Kansas.

The race was highlighted by a crash on lap two in which Chad Boat’s car flipped over.

Earlier on Friday ARCA announced that Fox Sports Group had reached an agreement to televise at-least ten races either live or from the same day in 2013.