Facebook
Twitter
Pinterest
WhatsApp
ReddIt
Digg
Danica-Mania is dying down. More then a year later the thought of Danica Patrick attempting to compete in one of NASCAR’s touring series does not conjure up the same fiery debate among fans. Yet, Danica is finally showing some reasons to be given a ride in the Sprint Cup Series.

Danica Patrick finished 17th at Phoenix International Raceway in Sunday’s AdvoCare 500. It was the best finish of her Cup Series career topping the 24th place finish she had a week earlier at Texas Motor Speedway.

This season Danica was to run ten races in the No. 10 car. After eight races of finishes 25th or worse Danica finally hit on something at Texas. Some will say growth is expected, others will claim that Texas was the easiest track on her schedule. Either way, Danica finished 24th and more importantly on the lead lap for the first time in the Cup Series career. 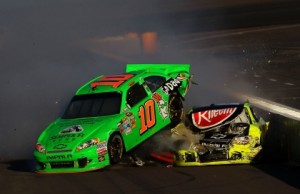 On Sunday she was doing one better. Patrick had run a clean race and considering some of the shenanigans that happened at Phoenix it would have been easy to forget about her.

For 318 laps Patrick remained on the lead lap. Running 12th with a lap to go Patrick was nudged by veteran driver Jeff Burton. Her car hit the wall and came down the track. No caution was thrown by NASCAR and Patrick attempted to limp her battered car around the 1.0 mile Phoenix track.

Coming to the line for the checkered flag a slew of cars slid in the oil wrecking one another and sending Patrick’s car airborne for a moment. Patrick was scored 17th. NASCAR has yet to make the results official so we do not yet know if Patrick finished on the lead lap or as the first car one lap down.

Asked about the last lap crash Patrick did not call anyone out. Instead she simply said she was trying to finish on the lead lap and earn her best finish in the series.

“We had a green-white-checkered it was a nice exciting finish for the fans.  Got around (turns) one and two and came off had decent distance on the No. 31 and he went down and took the apron got down into (turn) three and I did not think he was near close enough to be on me going into (turn) three.  I left a little bit of room, not a ton of room for sure, but I think, Tony Gibson (crew chief) said he went down and talked to him and he said he just went in too deep.  Clipped my left-rear, spun me around and I just tried to limp back to the line.  I didn’t know exactly how much damage I had or what it was, but just trying to limp to the line and get the finish on the lead lap, whatever that was.  Still our best finish, but you always want more. I was 13th I think or something right around there and that would have been a really good finish.  Shoot, some days I would take that in a Nationwide car.”