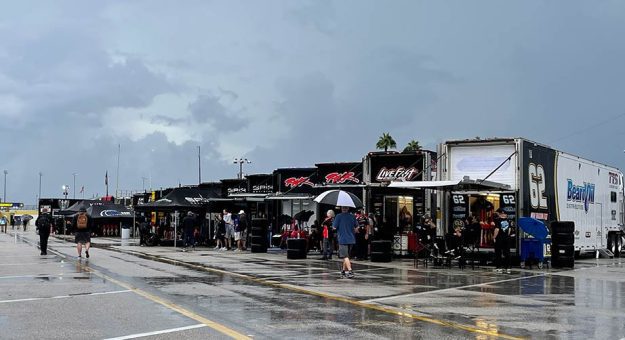 Wet weather has resulted in the race now being scheduled for 10 am ET on CNBC, the NBC Sports App, MRN and SiriusXM NASCAR Radio.

Late-afternoon storms and lightning delayed the opening of the Cup Series garage ahead of Saturday’s Coke Zero Sugar 400. The wet weather lingered, pushing back the scheduled 7:46 p.m. ET green flag time at the 2.5-mile Florida track.

Starting the race on the front row tomorrow will be Kyle Larson and Chase Elliott after qualifying was rained out on Friday resulting in the field being set according to the NASCAR Rule Book, and the performance metrics formula.

This is the 26th race of the season for the Cup Series. Currently 14 drivers are guaranteed playoff spots, with Kurt Busch dropping his request for a waiver. Two spots remain open and will be determined either by points or if a driver not currently in the playoffs winning with the other spot going to the highest points driver.

The Cup Series post season will begin next weekend at Darlington Raceway.