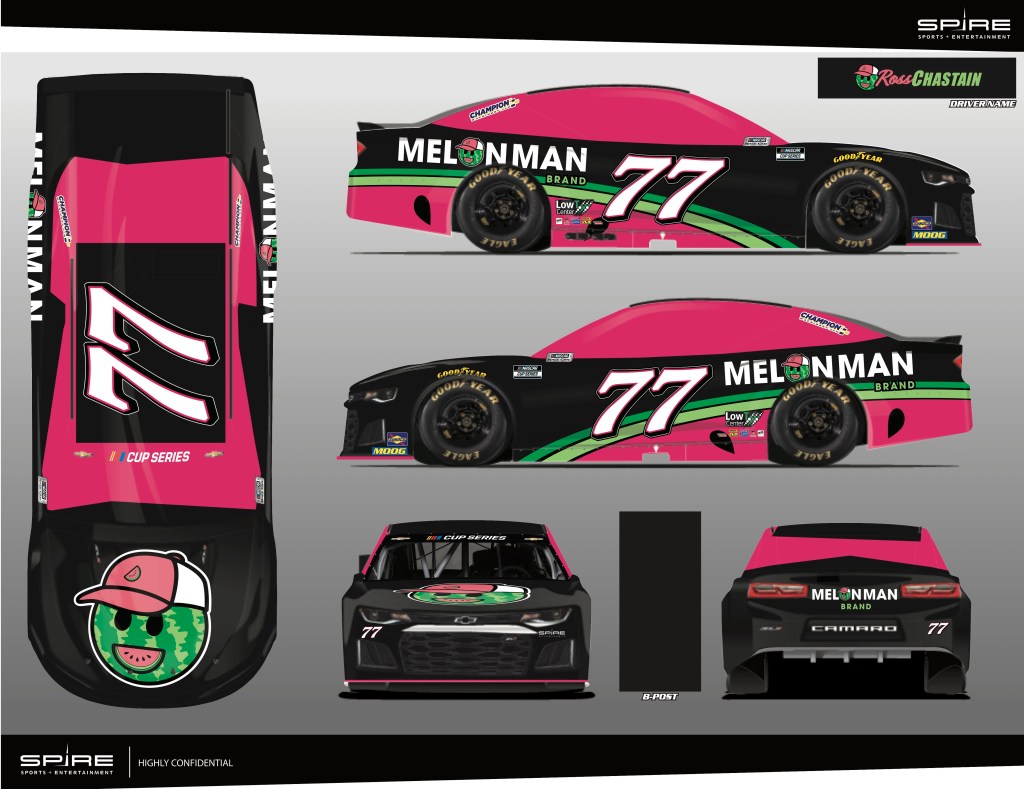 The No. 77 Chevrolet Camaro ZL1 will showcase Chastain’s Melon Man Brand as the NASCAR Cup Series embarks on its inaugural doubleheader weekend with the NTT IndyCar Series at the legendary 2.5-mile speedway.

“I’m excited to roll out the Melon Man Brand paint scheme this weekend at Indianapolis Motor Speedway,” explained Chastain, an eighth-generation planter and fourth-generation watermelon farmer from Alva, Fla. “It’ll be fun to do something new. When we came up with the idea to create a personal brand, we wanted to do something different, something that would stand out. I think the look of the car and our branding initiatives check those boxes. Jeff (Dickerson) and T.J. (Puchyr) have supported me and my career without a moment’s hesitation, ever. It’s an honor for me to drive for Spire Motorsports this weekend in Indianapolis.”

Chastain has made five Cup Series starts in 2020, earning a season-best 17th-place finish in the Auto Club 400 at Auto Club Speedway while filling in at Roush Fenway Racing aboard the team’s iconic No. 6 machine.

In his two previous NASCAR Cup Series starts at IMS, Chastain finished 26th and 22nd, respectively completing all but two of the 320 laps contested. In Xfinity Series competition, the 27-year-old has made four IMS starts and calls a 12th-place finish a career best.

“Any time we race at Indianapolis Motor Speedway, it’s a big deal,” said Spire Motorsports co-owner T.J. Puchyr. “That said, I would qualify this race as historic. For the first time in both NASCAR Cup and IndyCar Series’ history, we’ll have a doubleheader where both series will race at the grandest track in the world on the same weekend. Spire Motorsports is extremely proud to put a member of the Spire family in the driver’s seat and to support the Melon Man Brand at the same time. We love watching Ross compete so this weekend will be a lot of fun for our entire organization.”