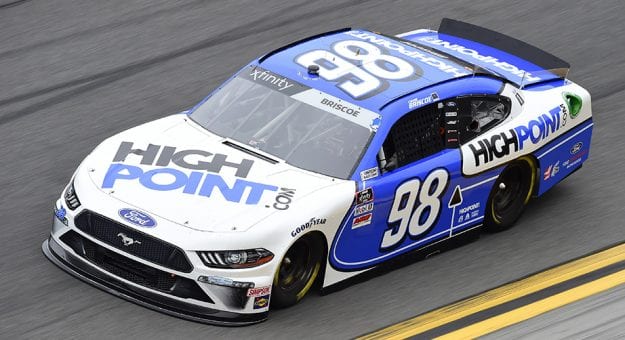 Kyle Busch needed only 15 laps to make his way into the top-five in Thursday’s running of the NASCAR Xfinity Series race at Darlington Raceway despite starting 26th thanks to a random drawling. It would not be the last time Busch needed to climb up though the field and the second time would prove to be too much as Chase Briscoe was able to take his No. 98 Ford Mustang to victory lane for his second win of the year.

Noah Gragson began the Toyota 200 on the pole and led the first 15 laps until a modified competition caution took place where drivers could pit without losing positions on the race track. The race, scheduled to start at noon did not take the green flag until 4:30 pm ET. The second caution came out after the No. 93 of Myatt Snider tapped the wall after racing with Timmy Hill causing his tv panel to rip off the rear of his car. Gragson would win the first stage which came to an end at lap 45.

Aided by his Cup Series pit crew Busch moved from fourth to first on the ensuing pit stops. The second stage would run without a caution as Busch cruised to the win while the threat of rain loomed in the background.

On pit stops after stage two, Busch was busted for speeding on pit road and sent to the back of the field. That penalty pushed Justin Allgaier to the front of the field. Chase Briscoe would then take the lead from Allgaier only to relinquish it with 18 to go. With 16 to go Michael Annett went around bringing out a caution setting up the finish of the race.

Briscoe would lead the field to green with nine to go while Busch restarted third. The driver of the No. 98 car was able to clear Allgaier on the restart but soon found himself in the sights of Busch. As the drivers came to the white flag Briscoe made contact with the wall. The battled and on the closing lap but it was Briscoe who got to the checkered flag claiming the win.