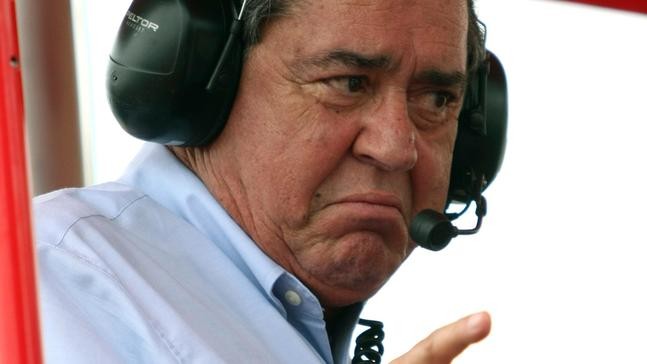 Felix Sabates has retired from NASCAR as he steps aside from being a partner in Chip Ganassi Racing.

“Where do you even begin to describe Felix Sabates? He’s done so much for the sport of racing. I teamed up with him almost 20 years ago, and he’s been a great business partner and an even better friend,” said Chip Ganassi opf Sabates. “In that time, the only thing we’ve had an argument over was who was picking up the tab at dinner. Felix helped me develop as an owner as well as an individual. His track record in this sport certainly sets the bar high for anyone that follows. I’m proud to call him a friend and wish him all the best.”

A Cuban refugee, Sabates become a resident of Charlotte back in 1963 and was part of the original ownership for the NBA’s Charlotte Hornets. He also was known for his philanthropic contributions and has received several honors and awards for his generosity.

Belmont Abbey College in North Carolina has named its dining hall after him, Elon College and UNC Charlotte bestowed upon him Honorary Doctorate degrees and he received a “Special Blessing” in writing from Pope John Paul II. Sabates became a member of the philanthropic Dream Makers Society of the Boys and Girls Club of Broward County, Fla., in recognition of his 12-year commitment to and support of special fundraising events. In his honor, the Felix Sabates Athletic Center was dedicated in Fort Lauderdale, Fla., in November 2000. The facility is the largest Boys and Girls Club in the state. He also is a large contributor to the Levine Children’s Hospital, which bears a special plaque in his honor is in the main lobby. Sabates has contributed much money to and served on the board of Atrium Health Care system for over 30 years while also being a member of the Atrium Health Foundation Board.

“I look back to the 1980s when I first started in this sport, and I can tell you that the landscape has really changed. It’s been challenging at times, and tremendously rewarding watching the sport grow. When I started the NASCAR team, it was just a different time -a smaller regional sport. Then NASCAR grew and grew into a big business and continued to grow after my partnership with Chip,” said Sabates of his career. “I’m proud of what I’ve done over the last 30 years. I have friendships that will last a lifetime. I hope that what I have tried to give back to the sport – whether it be bringing NASCAR to Mexico or being instrumental in starting the sports car program with Chip – will be equal to what the sport has taught and given me. I’ve always said that I never wanted to be an old man walking around at the track; this is my way of honoring that commitment I made to myself years ago. I wish Chip and his teams all the success in the world and will be keeping a close eye on the sport from afar and maybe even make an appearance from time to time.”