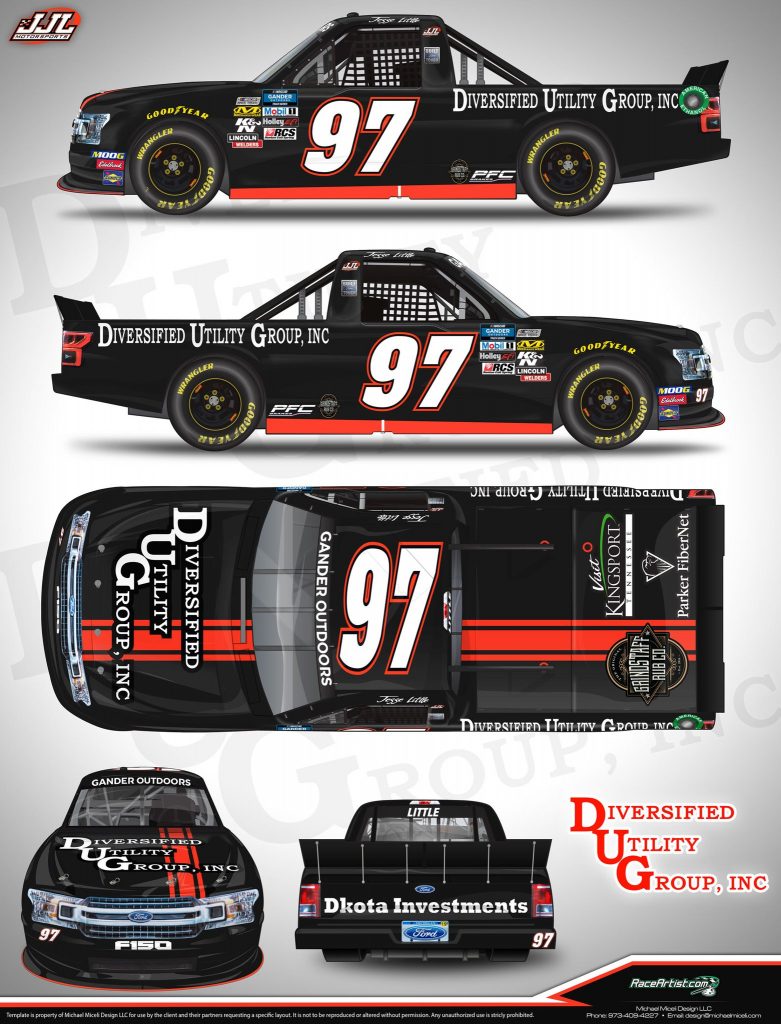 Little, the Sherrills Ford, N.C. native is poised to make his ninth Truck Series start of the season and fourth at Homestead’s South Florida 1.5-mile track.

For the NASCAR Next alumnus, he hopes to deliver and capitalize on another trip to Miami and build on the team’s ninth-place finish last November.

“I can’t believe Homestead is here,” said Little. “I am blessed to have another opportunity to compete in the NASCAR Gander Outdoors Truck Series and the chance to drive this No. 97 Diversified Utility Group Ford F-150. Homestead can be a challenging track, especially as the track transitions throughout the day, but hopefully we can take our notebook and apply it this week and get a strong finish in JJL Motorsports’ last race.”

For the 23rd race of the season, Little will be supported by the Diversity Utility Group LLC.

“To have the Diversified Utility Group LLC as the partner for JJL Motorsports this weekend at Homestead means the world to me and that is probably understated,” said president Logan Puckett.

“It certainly is a reminder that hard work and dedication does pay off and anything is possible if you set your mind to it and It also serves as motivation to continue to keep pushing and keep working hard towards our future goals.

“Also, having been based in the Carolinas historically we are hoping this will bring some brand awareness to our company in Florida and the Southeast as a whole.”

For Puckett, his experience at Homestead though is just the beginning.

He has purchased the assets of JJL Motorsports and will debut the team in 2020 as Diversified Motorsports Enterprises.

The team plans to run a limited schedule next year starting with the season-opener at Daytona (Fla.) International Speedway in February with Little as the team’s primary driver.

“I am really looking forward to taking over an outstanding program that JJL has put together as it provides a great foundation to build on and hopefully grow,” added Puckett. “I think the growth potential is what excites me the most.

“I am certainly looking forward to the challenge that this provides, and I hope that I can bring some value to the team and ultimately it would be awesome if I can bring value to the sport as a young owner with a fresh outlook.”

For Little, 22, who was announced last week as the new full-time driver for JD Motorsports with Gary Keller in the NASCAR Xfinity Series is thrilled to see Puckett take the reins of the team.

“I’m honored to represent Diversified Utility Group this weekend at Homestead,” added Little. “Logan has been so excited about the opportunity to enter the Truck Series as an owner in 2020, but to have his company be a part of our last race under the JJL Motorsports banner as a sponsor is even more awesome.

“Hopefully we can have a good performance for him on Friday night before looking ahead to 2020.”

@JJL_Motorsports treks to @HomesteadMiami welcoming new partner Diversified Utility Group for the #FordEcoBoost200, while preparing to turn reins over to new owner @LPuckett_97@jesselittle97 to continue to drive No. 97 In 2020 along with Xfinity Serieshttps://t.co/XyhE3Xyfgt pic.twitter.com/Glj6kp9bYs