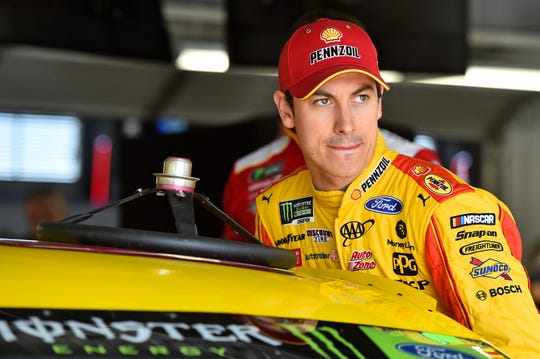 Joey Logano won the first of three stages at Kansas Speedway in Sunday’s NASCAR Cup Series race earning himself 10 points as he eyes moving on in the playoffs.

Daniel Hemric began the day at the front of the field after winning his first pole in qualifying on Saturday.

Kyle Larson would take the lead from Hemric on lap 5. On lap 11 Alex Bowman would damage the left rear of his No. 88 machine. Joey Logano also received damage in the early laps of the race.

With seven laps to go in the stage Ryan Newman smacked the wall following contact with teammate Ricky Stenhouse Jr. Pitstops took place with four laps to go in the stage with some teams making the decision not to pit as they eyed stage points. Five wide resulted with Clint Bowyer who restarted second falling back in the field while Joey Logano attempted to hold off Chase Elliott. Logano would win the first stage.