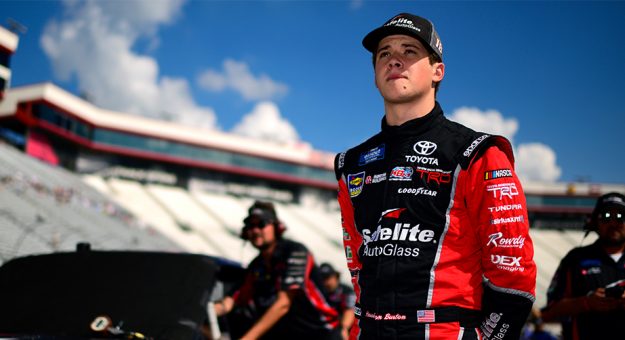 HUNTERSVILLE, N.C (October 17, 2019) – Joe Gibbs Racing (JGR) announces today that Harrison Burton will make the move to full-time Xfinity Series driver in 2020 competing in the No. 20 Dex Imaging Toyota Supra. Burton will also contend for the 2020 Rookie of the Year honors.

Burton made his Xfinity Series debut at Bristol Motor Speedway on April 6, 2019 and competed in a limited schedule throughout the season sharing the No. 18 Supra with fellow JGR drivers Kyle Busch, Denny Hamlin and Riley Herbst. With six Xfinity Series races to his credit, Burton recorded a career-best finish of fourth at Iowa Speedway on June 16 in just his second-career start in the series. Burton has two more opportunities this season to earn his first win in the series before turning his attention to the full season in 2020 and contending for the 2020 Xfinity Series championship.

“Next year is going to be a really cool opportunity for me because I grew up watching my dad race in the Xfinity Series, said Burton. “Making my first start at Bristol this year was really surreal. I remember being a little kid and watching him race there and now, I will have the opportunity to compete for the Xfinity Series championship next year. On top of that I’ve got Dex Imaging continuing their support of me for a majority of races next season. That’s really cool because I’ve had them as a sponsor since I was 13 and to bring them from pro late models all the way to the Xfinity Series is pretty wild. I want to finish this season strong, but I’m excited to get 2020 started. My time with JGR this season will really help me because I’ve already gotten to know so many people there and it’s such a great team and organization. They have a long history of helping to develop drivers and this is big next step in my career.”

Looking to continue building their relationship with Burton, Dex Imaging will move with Burton to JGR as his primary partner on the No. 20 Supra.

“Dex Imaging has been a supporter of Harrison’s since he was 13 years old,” said Dan Doyle, CEO of Dex Imaging. “We are extremely excited to continue our relationship as he continues his advancement in the sport.”

Burton is currently running full time in the NASCAR Gander Outdoor Truck Series (NGOTS) for Kyle Busch Motorsports where he has earned seven top-five and 10 top-10 finishes with three races remaining this season. With 35-career starts in the NGOTS, Burton has 11 career top-five and 17 top-10 finishes. Burton has also made 33-career starts in the NASCAR K&N Pro Series East putting together an impressive 2017 season in which he earned five wins, 12 top-five finishes and finished inside the top seven for each of the season’s 14 races.

“As Harrison (Burton) moves up to the next level of his career, we’re happy to have him join JGR full time and go behind the wheel of the No. 20 Supra,” said Steve DeSouza, Executive Vice President of Xfinity Series and Development for Joe Gibbs Racing. “Harrison has continued to show progress this season in his limited starts and I know that will only continue to develop with more seat time while contending for the Xfinity Series championship.”

Crew chief for the No. 20 Toyota Supra will be announced at a later date.