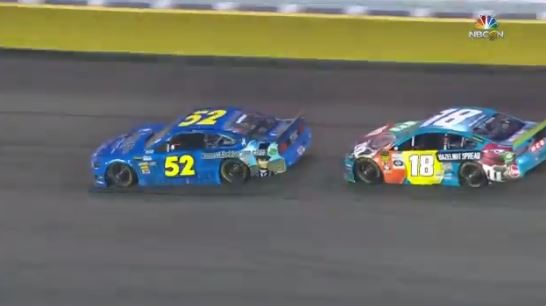 Kyle Busch was not happy with the way the South Point 400 ended on Sunday night at Las Vegas Motor Speeday.

Busch was upset with contact he made with the No. 52 Rick Ware Racing car driven by Garrett Smithely which saw Busch fade from fourth to 19th in the closing laps of the race.

Following the race Busch questioned why guys who had never won late model races were competing in the top level of NASCAR and quipped that his (insurance) premiums just went up.

“He’s never been in the position we’ve been in, so he doesn’t know how that goes. That’s the way I see it,” replied Smithley.

Smithley also told Jerry Jordan of Kicking The Tires,  “Put me in one of [Busch’s] late models or trucks and I will win.”

Held my line…2 cars got around 🤷🏼‍♂️ https://t.co/pZCRb4uFay

Ending the night Smithley tweeted out NBCSN footage of the incident which shows William Byron going low and Alex Bowman going high around him with Busch running into his rear end.