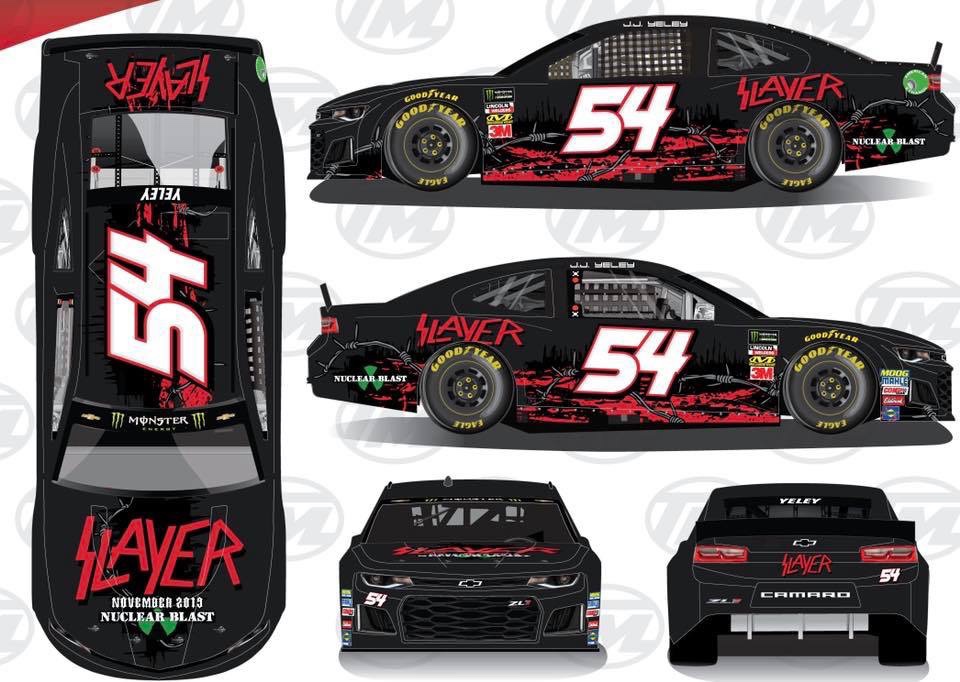 Rick Ware Racing announced Friday morning that JJ Yeley would be behind the wheel of the No. 54 Chevrolet Camaro at Bristol Motor Speedway.

RWR has run car No. 51, 52 and 53 this season typically as a two car team but more recently as a three car effort.

At Bristol the No. 54 car will hit the track with Slayer appearing across the hood, deck lid, tv panel and sides.

Slayer is an American thrash metal band from Huntington Park, California. After nearly 40 years together, the band is conducting one final world tour, The Final Campaign, The Last Leg, which takes place in several major US cities from November 2 – 30, 2019.

“It’s exciting and awesome that Rick and the boys are wearing the Slayer banner making us a part of NASCAR history!” commented Tom Araya from Slayer.

“NASCAR racing and Slayer have a lot in common”, said King. Both are extremely fast, intense and aggressive. I can think of nothing more rad than seeing the Slayer logo on Rick’s car with JJ behind the wheel. I’m sure Disciples of everyone involved will be completely stoked on the bond between these two fierce entities!” commented Kerry King from Slayer

“I am super pumped to have the legendary metal band, Slayer, on my Rick Ware Racing No. 54 Chevrolet for one of the greatest races of the year, The Bristol night race! Being able to showcase the legacy that Slayer has created over the past 40 years is a true honor,” commented JJ Yeley.