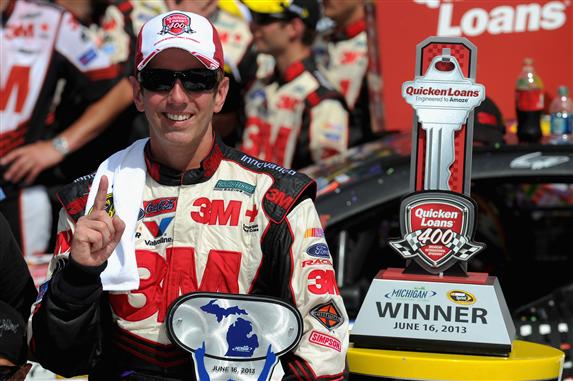 With Greg Biffle running this weekend’s NASCAR Gander Outdoors Truck Series race in Texas, we could not help but recall many of the great moments of “The Biff.”

Biffle last ran a NASCAR race in 2016 at Homestead-Miami Speedway. At that point few considered it may be the last time Biffle raced in NASCAR.

But instead of remembering a moment where Biffle was merely an also-ran, we flash back to 2013 at Michigan International Speedway when driver No 16 won the Quicken Loans 400.

To say Biffle loved racing at Michigan or some of the 1.5-milers which are compared to it would be an understatement. Of Biffle’s 19 wins in the Monster Energy NASCAR Cup Series, four came at Michigan including back to back wins at the track in 2012 and his final win in 2013.

Not known to be a track that saw drivers come from the back, Biffle started 19th at the 2013 race but managed to lead 48 laps. Teammate Carl Edwards sat on the pole that day but finished eighth and fan favorite Dale Earnhardt Jr. who led 34 laps was relegated to a 37th place finish after losing a motor. It was not quite the late climb though the field which earned Biffle the win in 2012 but at the time it did score Ford their 1,000th win in NASCAR’s top three series.

Even with Roush Fenway Racing on the decline who could have predicted that Biffle would never see victory lane again?