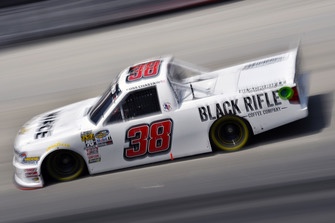 Ross Chastain announced on Tuesday that he was switching points to the Gander Outdoors Truck Series rather than the Xfintiy Series.

“After much consideration and many conversations, I’ve decided to pursue championship points in the NASCAR Gander Outdoor Truck Series, effective immediately,” said Chastain” “My Niece Motorsports team has been very fast all year, and we have a tall order ahead of us to get both in the top 20 in points and win a race before the playoffs start. But that’s a mountain we’re willing to climb. This shift will allow me to be in the truck race this weekend in Texas, and I’m grateful to everyone at Niece Motorsports for giving me this opportunity.”

Chastain will compete in the GOTS event at Texas this week skipping Xfintiy and Minster Energy NASCAR Cup Series events in Michigan.

“I’m thankful to everyone at Johnny Davis Motorsports and Kaulig Racing for their efforts this year,” said Chastain. “I will continue to run races for each organization where sponsorship for 2019 has been solidified. We have some wonderful partners at both organizations, and I’m fortunate they stand behind my decision, as well. I’m still going to go out and fight as hard as I can for wins.”

Chastain and his Niece Motorsports team must win again between now and the end of the regular season (Aug. 10) in order to be playoff eligible.