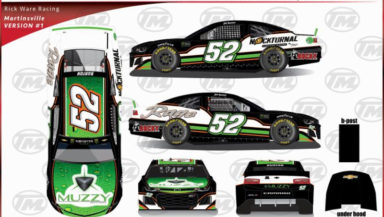 Burton will drive the No. 52 Chevrolet Camaro ZL1 with support from Muzzy® Bowfishing.

Burton’s partnership with Rick Ware Racing marks the return of the Halifax, Va. native to the Cup Series since competing at the historic Virginia short track with RWR last fall where he finished a respectable 33rd after starting 39th.

The tight 0.526-mile paperclip is considered Burton’s hometown track and where the son of former Daytona 500 winner Ward Burton honed his short track skills competing in several Late Model events at the legendary short track during the early days of his Motorsports career.

Since then, Burton has competed in various forms of stock car racing, including all three of NASCAR’s national series including the Monster Energy NASCAR Cup Series.

Burton is poised to make his fourth Cup start at Martinsville. In his previous three efforts, the 26-year-old has earned a best effort of 27th in 2015. In six NASCAR Gander Outdoors Truck Series starts at Martinsville, he has earned one pole, two top-five, top-10 and four top-13 finishes respectively.

“I am really excited to get back in a Cup car at Martinsville with Rick Ware Racing,” said Burton. “I have a great relationship with Rick and the RWR team. Hopefully, we can build on how we performed last year.

“Martinsville is my home track and I am looking forward to getting back there and promoting Muzzy Bowfishing. As everyone knows, I love the outdoors and I am big into hunting and fishing, so having them and also the Rocky brand on the car is very happy.”

Founded in 1984, Muzzy® is the number-one name in fixed-blade broadheads, and it is a pioneer in the bowfishing market. Muzzy® manufactures a wide array of broadheads, from the tried-and-true three- and four-blade legacy models to newly designed, ultra-accurate three-blade broadheads and even a line of hybrid designs, all with a variety of grain-weight choices.

Muzzy also manufactures a line of ready-to-shoot arrow | broadhead | field-point packages for both vertical bows and crossbows. The Muzzy® Bowfishing line includes just about everything a bowfishing addict could need from numerous styles of tips, to lines, to arrows, to rests, to reels, right up to complete bowfishing packages.

“We are extremely honored and excited to be partnering with Jeb and Rick Ware Racing,” offered Teri Quinn, media manager for FeraDyne Outdoors, the parent company of Muzzy® Bowfishing.

“This is our first time promoting our product using NASCAR and we are excited to be affiliated with Jeb, who is an acclaimed hunter. We know this partnership will benefit us as we put our brand in front of the NASCAR audience. The race is sure to be a great time for everyone and our team is excited to go there and cheer on Jeb!”

In addition to Muzzy® Bowfishing, Rockyboots.com will serve as an associate partner for the STP 500.

“I’m very excited to bring Rocky into the sport,” added Burton. “They have been a great partner on my crossroads hunting show and I look forward to expanding that relationship onto the race track.”

Rick Ware, team principal of Rick Ware Racing says the team is thrilled to welcome Jeb back to the team and believes he can help elevate the team’s performance in the first short track of the season.

“We are excited to have Jeb back in our car at Martinsville,” sounded Ware.

“The Burton name carries a lot of weight in that area and we will do all we can to put Jeb in a competitive car. We know he can drive it, so the guys at the shop have been working very hard to build him a good car.

“We are going there to get the best finish possible for not only him but Muzzy® Bowfishing and Rocky brand too.”