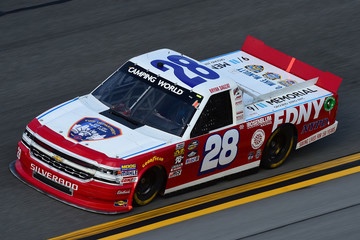 Rock, who serves as a jackman, was hit by the No. 28 truck of Dauzat who was unable to stop in his pit stall due to brake issues.

NASCAR officials say that Rock was “awake and alert” following his transportation to Halifax Health Medical Center for further evaluation.

“Going into the turn on the drop of the green, something came off Joe’s truck,” Dauzat said. “Whether it was from his truck or someone else’s truck, I don’t know. I thought I centered it, but it must’ve hit the right-front tire. I don’t know.”

Rock was taken off pit road on a stretcher.