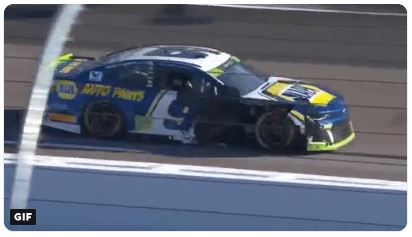 Both Chase Elliott and Kevin Harvick both saw their Championship 4 hopes evaporate in Sunday’s running of the Can-Am 500 at ISM Raceway.

On a late race restart Erik Jones would make contact with Busch opening the door for Denny Hamlin to make a move for the lead. Hamlin would then bump into Busch who sent the No. 11 turning collecting Elliott and others in the process.

Busch would be eliminated from the race after his crew ran out of time to repair his No. 41 car.