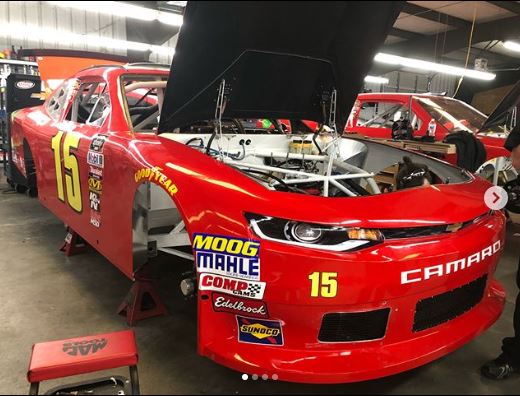 This weekend Mike Skeen will return to drive the No. 15 Chevrolet Camaro for JD Motorsports. Skeen has not driven in any of NASCAR’s top three series since 2013 at Bowmanville.

It was then that his girlfriend, Kelly Heaphy, took out his frustrations on the face of driver Max Papis after he and Skeen wrecked.

Video of the slap was aired on tv as he occurred just after Papis completed an interview.

Heaphy was fined $2,500 for the slap which appeared on tv and suspended indefinitely. Skeen’s crew chief Bryan Berry was also fined $2,500.

At the time NASCAR released the following statement:

In the NASCAR Camping World Truck Series, Bryan Berry, crew chief of the No. 6 team, has been fined $2,500 for violating Sections 12-1 and 9-4A (Crew chief assumes responsibility for the actions of his team members) following Sunday’s race at Canadian Tire Motorsport Park.
Kelly Heaphy, who was with the No. 6 team at Canadian Tire Motorsport Park, has been fined $2,500 and denied access to all NASCAR events indefinitely for her involvement in an altercation with a competitor following Sunday’s race.

The slap came after Papis and Skeen made contact with one another in the final corner of the truck race. The two drivers drove next to each other on the cool down lap and someone attempted to get to Papis as he was ready to exit his truck.

Later Papis went to Skeen’s hauler where he allegedly attempted to pull Heaphy down the stairs in an effort to get to Skeen. Papis alleged that Heaphy dislocated his jaw from the slap.

The race was won by Chase Elliott who made contact with Ty Dillon in the final corner just before Skeen and Papis encountered the same fate.

Skeen and Heaphy are still together with frequent photos posted on Instagram. Skeen has completed in 13 IMSA races from 2014 thru 2017.