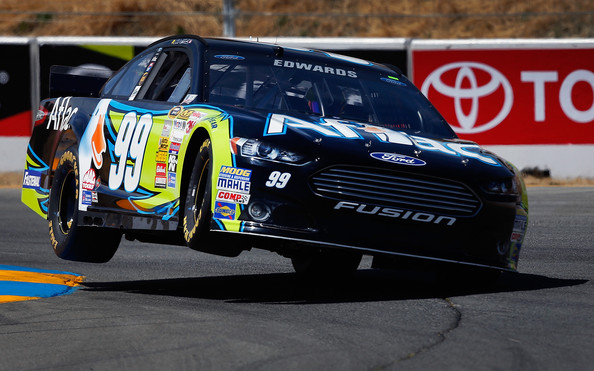 Carl Edwards won the Toyota Save Mart 350 from Sonoma Raceway on Sunday. The driver of the No. 99 Aflac Ford Fusion was able to make all the right and left turns at the first road course event of the season. The win is the second of the season for Edwards whose future with Roush Fenway Racing is up in the air.

Sunday’s race began with Jamie McMurray on the pole but AJ Allmendinger was able to skip past him on lap 9 for the lead. As has been the case at Sonoma different pit strategies began to play their hand with Jimmie Johnson moving to the front. Following pit stops and a restart on lap 75, it was Clint Bowyer who went to the front of the field.

Following a caution for contact between Dale Earnhardt Jr. and Matt Kenseth it was Marcos Ambrose who went to the lead on lap 80. Following another caution it was Carl Edwards going to the lead on a restart on lap 85. From there Edwards was able to hold off a charging Jeff Gordon to claim his first road course win in the Cup series.