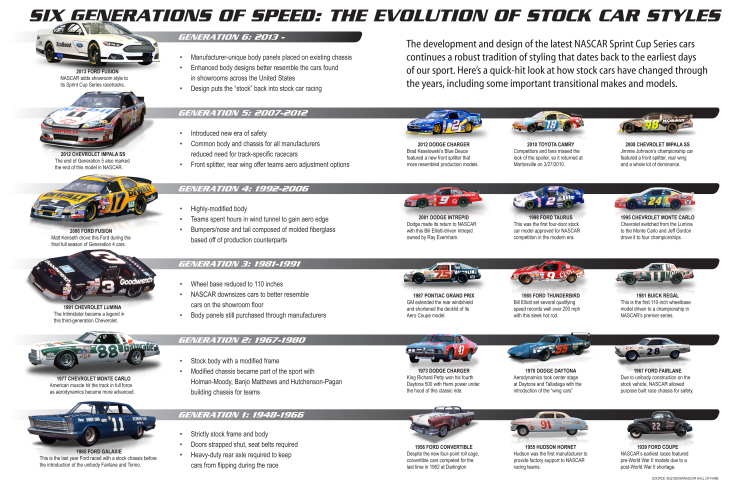 NASCAR Vehicle Evolution: Then and Now

NASCAR racing has come a long way in the half-century since it was founded. What were once stock cars, which meant that they were slightly modified consumer vehicles produced on an assembly line, have become the hand-built, precision NASCAR vehicles we see today. Let’s take a look at how the body, engine and safety features have changed from NASCAR’s founding in 1948 to today.

The body and frame in 1948: When stock car racing started to become popular, the cars had so many original parts they often served as the driver’s main source of transportation. These were not specialized vehicles; the car body and frame were both made from the same steel as other vehicles on the road at the time.

The body and frame in 2013: Modern NASCAR vehicle frames are made up of a series of circular and square tubes of different gauges. The thicker tubes that surround the cockpit are referred to as the “roll cage.” The body is hand-made from thin steel to NASCAR template specifications. The only stock pieces left on modern stock cars are the hood, roof and deck lid.

The engine in 1948: Stock car engines of the 1940s were six or eight valve machines that came standard in the cars of the time. They were capable of less than 200 horsepower.

The engine in 2013: Today’s NASCAR vehicle engines can produce more than 750 horsepower, and are custom-made for racing. The 5.87 liter engines are precision engineered to achieve speeds of more than 200 miles per hour without the use of turbochargers or superchargers.

Safety in 1948: In 1948, when stock car racing was starting out, the drivers had little to protect themselves from dangerous wrecks. As the stock cars got faster, and racing became more popular, regular crashes prompted the introduction of safety features.

Safety in 2013: Decades of NASCAR safety improvements have made the sport much safer than it was in the past. Modern safety features include:

Despite the advancements in automotive technology, accidents still happen both on and off the racetrack. Make sure your passengers and vehicle are protected in the event of a crash with a car insurance policy. Having the right insurance coverage can make filing auto insurance claims easier, and more importantly, less expensive.

Dale Cooper has been blogging about financial services, insurance and education for more than three years. He holds a B.A. in English and lives in Cleveland. In his spare time, Dale enjoys cooking and traveling.

Note: Sponsored content was created and provided by Nationwide Insurance.