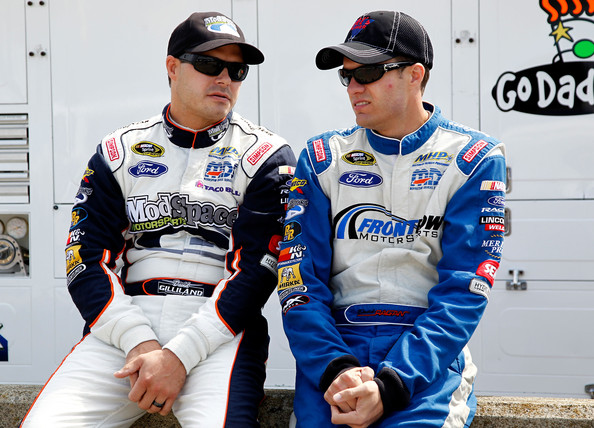 Front Row Motorsports will field three cars during the 2013 season. Entering its fourth year, Front Row Motorsports announced on Thursday that it would field cars for David Ragan, David Gilliland and Josh Wise at the NASCAR Sprint Cup level. The organization will continue their partnership with Roush-Yates Engines as well.

The 2012 season was the first year Ragan was a part of FRM. He scored the organizations best finish with a fourth place run in the fall race at Talladega after finishing seventh during the spring event. Ragan finished 28th in the overall driver standings while Gilliland was close behind in 30th.

“David Gilliland has been a rock for us for three years and David Ragan brought race-winning experience to us last year and returns for 2013.  That stability is huge for a young, developing team, and I know we’ll continue to improve and have even better results this upcoming season.” said team owner Bob Jenkins.

Jay Guy will return as crew chief for Ragan’s No. 34 team and Derrick Finley will continue to lead Gilliland’s No. 38 crew.

“There’s always a learning curve whenever something new is thrown into the mix, whether it’s a new driver, new crew chief, new car or new team members,” Ragan said.  “We have a new Ford Fusion for 2013, which I’m really excited about, so it will be really important and really helpful that all the other variables aren’t changing.  My crew chief, Jay Guy, and I built a great working relationship last year and that will help us be better this coming year.”

Likewise Gilliland is excited about the 2013 season.

“I’m excited to start my fourth year with Front Row Motorsports,” Gilliland said.  “We’ve gotten better each and every season and I’m eager to get the season going with Derrick (Finley) again.  Bob Jenkins has put a lot into this team since he started with a part-time team back in ’05.  He’s growing it the way he should and the results are showing.”

Front Row Motorsports plans to participate in Pre-Season Thunder at Daytona from Jan. 10 to 12.