Robby Gordon has not been attempting to qualify for NASCAR Sprint Cup Series races lately but that hasn’t stopped him from being involved in motorsports. While Gordon still eyes a full time schedule in NASCAR, with appropriate backing, he has been competing in off road racing.

In 2013 the Robby Gordon Stadium Super Truck Racing Series will start up with 10 events inside stadiums. Gordon plans to have 10 events in total. While the full schedule has not been announced two cities which are expected to have events are Los Angeles and San Diego.

The events will be two-day shows and will be modeled after the former Mickey Thompson Off-Road Race Series.

“Stadium racing helped Jimmie Johnson, Casey Mears and myself launch our careers,” said Gordon, a former IndyCar driver who has three NASCAR Sprint Cup wins. “Bringing off-road racing back to the stadium like Mickey Thompson did has been something that I have wanted to do for a long time, and I am proud to say that we have finally accomplished it.

The expected purse for one of Gordon’s events will be $60,000 with the overall championship netting $500,000. Despite the announcement of the new series Gordon has not given up his plans to race the upcoming Sprint Cup Series road course race at Sonoma. 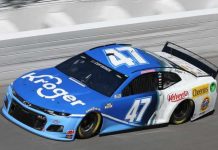