Rafael Palmeiro, 53, believes he can still play in majors 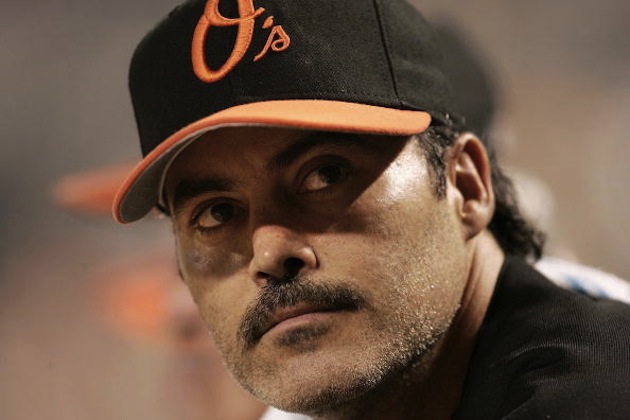 He is 53 years old and has not played in the big leagues since 2005 but Rafael Palmeiro believes he still has what it takes to play baseball at a top level.

When I first saw his name come up in the headlines I figured he had either made some steroid allegations or a plea for hall of fame votes. I did not think he would be talking about a comeback. At 34 years of age I may be closer to helping a major league team than a known cheater who famously pointed his finger at congress and told them “I have never used steriods… today.” Perhaps the “today” part was key and he simply meant he did not inject on that day.

Anyway it does not matter. We do not need to analyze this any more than we need to analyze a 53 year old former major leaguer eyeing a comeback as a player. Palmeiro’s chances of returning to the game revolve around a Jose Canseco independent league circus tour and accepting a role as a minor league instructor.

For those wanting to see him point his finger here is the clip again:

How much did steroids help? I don’t know. Palmeiro was a tremendous talent on the field during his playing days. He is just one of five players to amass 500 home runs and 3,000 hits.

Julio Franco played 15 games for the Braves as a 48 year old in 2007 but that came after consecutive seasons with the team and a brief stint with the Mets in which he still looked like a guy capable of filling out a major league roster and not a guy who has been sitting at home for almost 600 weeks. Franco found out at the age of 48 that his body finally deteriorated and he was still five years younger than Palmeiro is now.

Ichiro Suzuki, 44, is still looking for employment for 2018 after performing just below that of a replacement level player. The last five years have been difficult for Suzuki who has hit .263/.312/.333 during that span. His 57 stolen bases during that span is a far cry from a guy who used to steal 30 or more a season with ease but his defense has remained steady and you would be hard pressed to find many words negative of him.

Bartolo Colon eyes pitching again in 2018. He flamed out of the Braves rotation this year but found some success upon signing with the Twins. Still at 44 he finished the season with a 7-14 record and a 6.48 ERA. Sure there is more than wins and losses and ERA is only one measure but a hittable pitcher who suddenly finds trouble with walks does not make for a good solution to anyone’s rotation for 2018. He does plan to pitch in 2018 but very well will have to accept a minor league deal with an invitation.