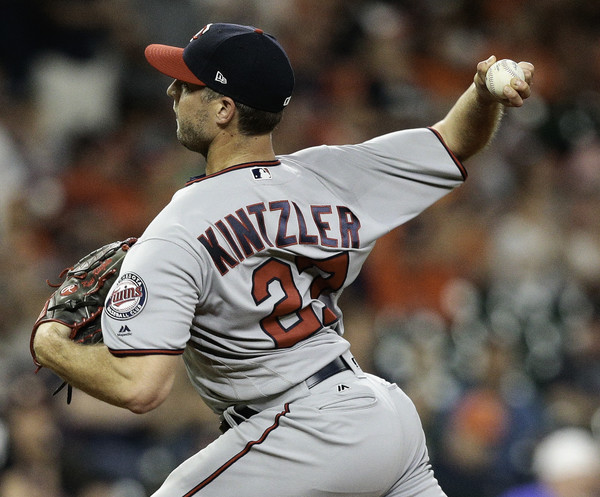 If the Cubs had it their way they would have kept Wade Davis on a one-year contract for the 2018 season.

That was never going to happen. Davis, much like Jake Arrieta, never considered accepting arbitration from the Cubs. Both men want contracts that extend past 2018 and 2019 for that matter.

Arrieta wants six years, Davis will likely want a long deal also and that leaves the Cubs whose young players will only become more expensive in a tough spot. Davis and former Royals bullpen mate Greg Holland are the class of the free agent relievers this season. If clubs are going to sign them, they will be paying up. That leaves the Cubs and others who are looking to keep costs in check for this year and the future to take a look at second tier guys such as Brandon Kintzler.

Kintzler, 33, was an All-Star for the Twins and promptly found himself traded to the Nationals before the deadline last year. He finished the year with a respectable 3.03 ERA and 1.15 WHIP across 71 1/3 innings last season. If the Cubs cannot find a new deal for Davis to their liking expect every effort to be made to add a guy such as Kintzler.

There will be no shortage of teams interested in Kintzler who will come cheaper in the short term for annual salary and the long-term with a shorter contract. There is also little indication that Kintzler requires that he be the closer on a team but truth be told if he wants to be paid like a closer and desires the gig it will happen. There are too many teams wanting back end of the bullpen help to think that Kintzler would have to accept a deal where he enters the season as a set-up man.

Already the Rockies, Cardinals, Astros and Twins have been linked to Kintzler in addition to the Cubs. All of those teams view 2018 as a contending season and all have serious questionmarks surrounding the bullpen.