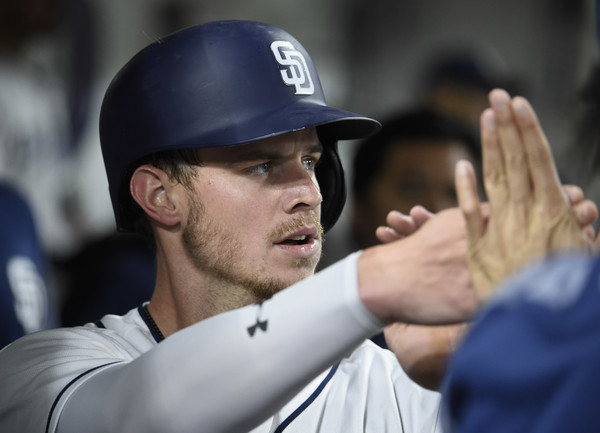 Wil Myers apparently is willing to play the outfield in 2018 if the Padres are able to sign Eric Hosmer.

The Royals would love to keep Hosmer but also in the mix are the Red Sox, Cardinals, Angels, Mariners, Phillies, Mets, Rangers and maybe a few others according to Jon Heyman who also broke the news of Myers willingness to move to the outfield.

Just look at the list of teams interested in Hosmer and you can already see that this deal is being held up by two things. Giancalo Stanton’s trade situation is preventing the Giants from making any moves as such a deal will impact how much money they can spend other places. About half of the remaining teams on the list are linked to Shohei Ohtani. Since both of these situations appear to be heading towards a conclusion within the next week perhaps free agency will finally start.

From what had been spread around about the Padres interest in Hosmer has been largely “due diligence,” in fact there is about 50 other guys the Padres have reached out in some form or another to say we’d take you on our team if the price is right and you want to come here.

The Padres have indeed checked in with Eric Hosmer's camp, but it's mostly due diligence at this point. Per a source, they've checked in with "around 50" free agents, majority of them pitchers.

Hosmer is a Gold Glove talent defensively but his offensive numbers have been typically bouncing between average to very good. He did win the Silver Slugger this year after compiling a career best .318/.385/.498 line matching his high of 25 home runs while adding 94 RBI. Those numbers would almost certainly drop in Petco Park considering the Padres had an even tougher time than the Royals at scoring last year.

So while Myers moving to the outfield allows the Padres to target Hosmer, it’s safe to say he would be willing to make the same move if the team was to sign lesser prized free agents such as a Matt Adams.