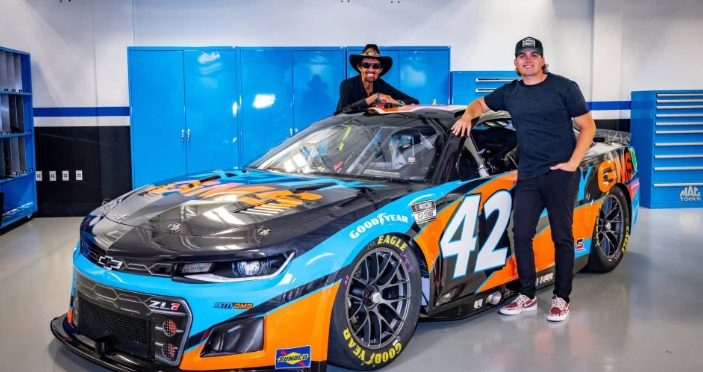 Noah Gragson will take over the wheel of the No. 42 Chevrolet in the NASCAR Cup Series beginning with the 2023 Busch Light Clash at the LA Coliseum.

A move regarding the car has been expected since it was announced that Ty Dillon would not be returning to drive for Petty GMS in 2023.

“To be able to finally announce my plans for next season and officially say I will be competing full time in the NASCAR Cup Series is a dream come true,” said Gragson. “This is what we all dream of when we start racing at a young age, to be able to compete at the top level with the best in the world. I’m excited to join Petty GMS and drive a car that has so much history in our sport, the No. 42.”

Gragson is currently driving the No. 9 Chevrolet of JR Motorsports in the NASCAR Xfinity Series where he has three wins on the season.

“Noah (Gragson) has shown tremendous talent throughout his career,” said Petty GMS Owner Maury Gallagher. “I’ve watched Noah from a young age competing on the West Coast to now competing at NASCAR’s top level and he’s shown the commitment, desire and ability to win at every level. As we move in to our second year of competition in the Cup Series, Noah is a great fit for our organization and I think with Erik (Jones) and his experience, the two will prove to be contenders each week.”

Gragson has made 123 starts with eight wins, 52 top-five finishes and 85 top-10 finishes in the Xfinity Series in his career.

“We’re excited to have Noah join the Petty GMS family and climb in the No. 42 next season,” said Petty GMS Chairman Richard Petty. “Noah’s proven he can win in the Truck and Xfinity Series and compete for championships, and we know he will bring that same fire with him to Petty GMS next season.”