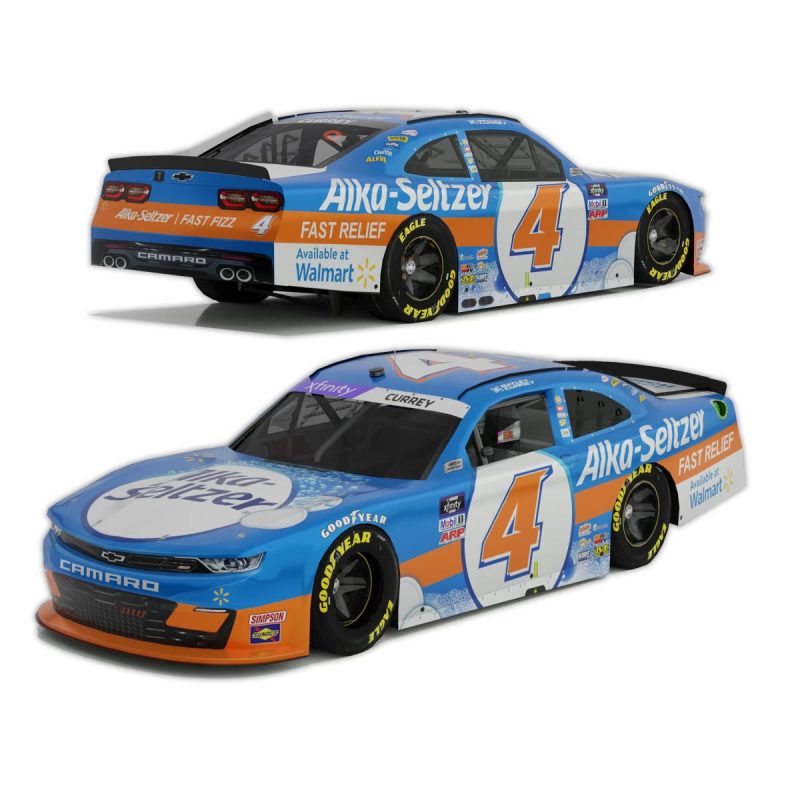 Bayley Currey has picked up a new sponsor for five events on the NASCAR Xfinity Series schedule starting with this weekend’s race at Pocono Raceway.

Currey’s No. 4 Chevrolet Camaro will be sponsored by Alka-Seltzer at Pocono and at four other Xfinity races to include Daytona, Bristol, Talladega, and Las Vegas.

“Super happy to announce that we will be having Alka-Seltzer on board for five races this season, starting this weekend at Pocono,” Currey said while appearing on SiriusXM NASCAR Radio’s Tradin’ Paint. “Super pumped to have them on board. It’s a huge company, really prestigious company. Excited to have them backing us and supporting us going forward.”

Longtime NASCAR fans will remember Alka-Seltzer appearing on the No. 52 Cup Series entry of Jimmy Means but they also sponsored a host of Xfinity Series entries including their last appeared in the sport on a car driven by Matt Kenseth at Homestead in 2004.

“I tell you, it’s been a long process, getting everything approved,” Currey admitted. “Paint scheme approved, firesuits approved. We’ve had a lot of help over at Johnny Davis Motorsports with AE Engine, they’re a marketing company. They’ve been helping us out, been working real close with those guys. They’ve even been helping me out with my podcast and stuff. Huge thank you to everyone over there, huge thank you to Tony, who is the V.P. of marketing over here.”

Currey has appeared in 18 Xfinity Series races this season and currently sits 22nd in the points. The best finish for Currey came at, the most recent race at, New Hampshire Motor Speedway where he finished 10th.