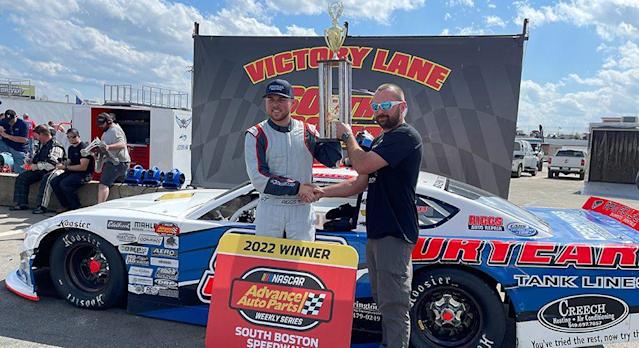 Riggs, 20, will drive the No. 62 Infinity Communications/Puryear Tank Liners Toyota of Halmar Friesen Racing in the TSport 200.

“I’m so thankful to get this opportunity,” Riggs said. “My dad and Trip Bruce were friends back in the day and Trip watched us the night we swept both races at Hickory Motor Speedway. It’s all about timing and hopefully I can make everyone proud.”

“I know this is going to be a big learning curve for me,” Layne said. “The trucks have radial tires and are much heavier. Aero is going to be involved and that’s something I’ve never really had to deal with before. A lot of curveballs are being thrown at me, but I have a lot of good people on my side to help me tackle this the best I can.”

With the truck series being absent from IRP for years, Layne believes that gives him an opportunity for a strong first race.

“A Top 10 finish would be a good goal,” Layne said. “I want to win every race I’m a part of, but we have to be realistic against guys who are veterans… If I can have a good showing and let everyone know I was there, then I’ll be happy.”