Cole Custer began the race on the pole but teammate Chase Briscoe would take the lead. As Briscoe led, Custer and Aric Almirola both had to pit due to the amount of dirt on their grills losing multiple laps.

NASCAR opted to throw a caution on lap 14 for the dirt giving Custer and Almirola one of their laps back via the waive around. Briscoe would bring out the second caution of the race on lap 50 as he spun from the lead after having a right rear tire go down.

The race leader has a right rear go down sending him into a spin in Turn 2!@KyleLarsonRacin becomes the new leader.#NASCAR #FoodCityDirtRace pic.twitter.com/UzTTJXtMvi

The first stage would end under caution with Kyle Larson as the leader after Justin Allgaier got into the wall.

Daniel Suarez would get the lead to start the second stage after staying out for the break.

Alex Bowman brought out the fourth caution for a single car spin on lap 92 as engine trouble would end the night of Denny Hamlin. The fifth caution came out on lap 98 for a multi-car incident involving Bowman, Kevin Harvick, Corey LaJoie, Austin Cindric, and Noah Gragson.

Contact between Brad Keselowski and Austin Dillon would bring out the sixth caution. Debris soon after brought out the seventh caution as rain began to move closer to the track. On the ensuing restart LaJoie and others made contact bringing out another caution.

As rain began to fall Briscoe would sneak past Suarez with 11 to go in stage 2. Bell would try but could not reel Briscoe in as the second stage came to an end giving the driver of the No. 14 his first career stage win.

When the pace car came out to pick up the field to start the third stage Christopher Bell spun with the track taking on more and more water.

NASCAR then pulled the cars down pit road for a red flag. Since scoring was stopped at the end of stage 2, Briscoe was still scored as the leader with Bell and Suarez behind him. 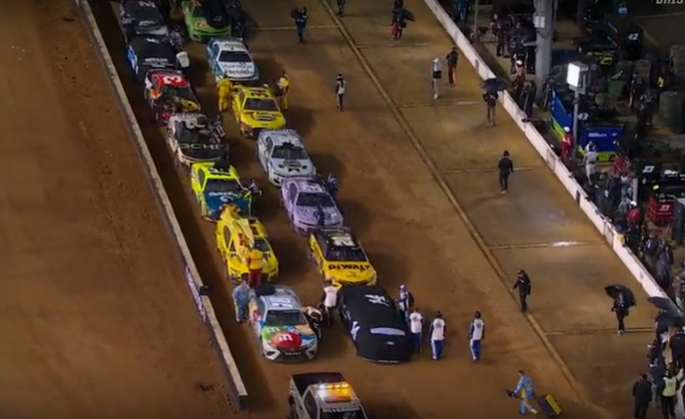 NASCAR clarified that cars who pitted would be behind those who stayed out on the track if the race resumed meaning Briscoe, Bell, and Suarez would be behind Kyle Busch. After an hour delay drivers were called back to their cars at 9:36 pm.

When racing resumed Tyler Reddick got by Kyle Busch who found himself sliding around the track while losing positions. The tenth caution came out on lap 162 for an incident involving Cody Ware, Chase Elliott, Martin Truex, Daniel Suarez, and Ricky Stenhouse Jr. Another caution involving Stenhouse occurred with 48 laps to go. It would just be a few laps before another multi-car accident took place on lap 212.

The race resumed with Reddick in the lead and Briscoe attempting to catch him. With two laps to go the pair found themselves working lapped traffic. Going into turn three Briscoe went for a slide job but took out both himself and Reddick allowing third place driver Kyle Busch to catch up an narrowly beat Reddick to the finish line.

Wow. Retweet to congratulate Kyle Busch on his win at Bristol! pic.twitter.com/1P4CkhNkYR

The win is the 60th in the career of Busch who has now won a race in 18 straight seasons.