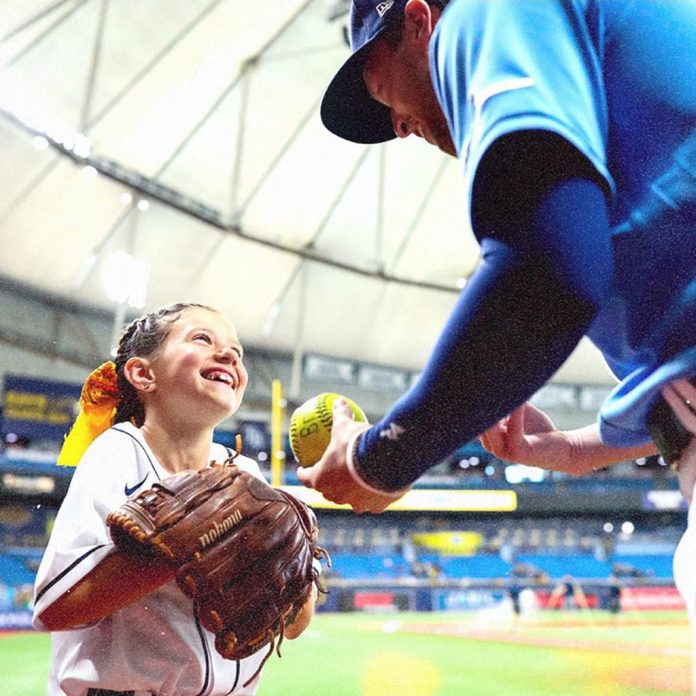 HomemlbBrett Phillips homers as young fan is being interviewed
mlbNews

Brett Phillips homers as young fan is being interviewed

Prior to Tuesday’s game against the Athletics, Brett Philips caught the first pitch from Chloe Grimes.

Grimes, 8, is battling cancer for the second time. She game Phillips a mint green and white rubber bracelet which read “Rally for Chloe our Princess Warrior” to which Phillips said he would try to do something special for her.

In the third inning Phillips hit a home run as Grimes was being interviewed on the Rays broastcast.

Brett Phillips homers as young fan is being interviewed https://t.co/m8EZOwnvjt #MLBFilmRoom via @MLB

“Perspective and appreciation for what I get to do on a daily basis, show up to play Major League Baseball and do this for a living,” Phillips said afterward. “And you have a young girl who’s 8 years old, battling cancer for a second time, and she can smile and enjoy her life? It’s crazy.”

On the broadcast Chloe was asked if she knew what just happened to which she replied “Brett Phillips just hit a home run!”
Facebook
Twitter
Pinterest
WhatsApp
ReddIt
Digg
Previous articleJackson Stephens picks up save in blowout loss
Next articleMike Minor set to begin rehab assignment