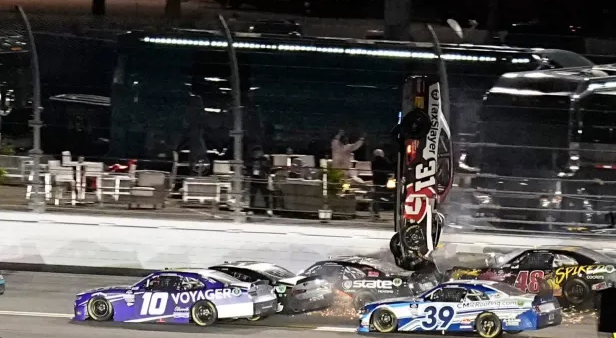 Austin Hill went to victory lane on Saturday night at Daytona International Speedway, but Myatt Snider described himself as “extremely blessed” following a terrifying crash on the last lap of the Beef. It’s What’s For Dinner. 300.

“A little sore,” Snider said. “I mean, I got pretty banged up there, so I just want to make sure I’m being as careful as possible.”

Snider, 27, was able to climb out of his car on his own power saying he had a sore left foot but told reports he believes he should be fine to race next week at Auto Club Speedway.

“I think I should be fine to race,” Snider said. “It’s just a matter of getting the opinions of the experts. But yeah, I think I’ll be fine.”

Anthony Alfredo appeared to tap Snider’s car on the last lap. As Snider crossed two lanes of cars the car driven by Jade Buford ran into his passenger side sending him airborne.

Truly thankful that @MyattSnider is out of the No. 31 after a flip on the final #XfinitySeries lap at Daytona. pic.twitter.com/GnZ3Zv9DYa

“Everybody’s trying their best to push as hard as possible, and I’m trying to keep as much momentum as I can get,” Snider said. “So, I felt the push and I started feeling the car go right. I’m like crap, I might be along for a ride here. And sure enough, I was. I got turned around to the side, and then I was facing backwards and started seeing the race track. I’m like hmm, this is getting better as it goes.

“I think what happened is that the left rear started yawing towards the fence, and then the fence caught it. … And then I got dragged into the grass, from what I could tell. But yeah, as I’ve said already, I’m extremely blessed to be as OK as I am and glad that Jordan Anderson Racing built us such a safe race car. And man, I really wanted to get the top-five finish. We were so close. I felt like we were in contention all day.”

Snider was credited with a 22nd place finish, Buford finished 23rd. Nine cars were involved in the crash but each driver was able to exit on their own and were cleared by the care center staff.

“I just saw sparks and crap flying everywhere, and it was quite the adventure,” Snider said. “I’m just so glad that I’m safe, I’m not any more torn up than I am. Just wish we could have gotten a better finish out of it.”

The crash damaged the catchfence which will be repaired overnight ahead of the Daytona 500.