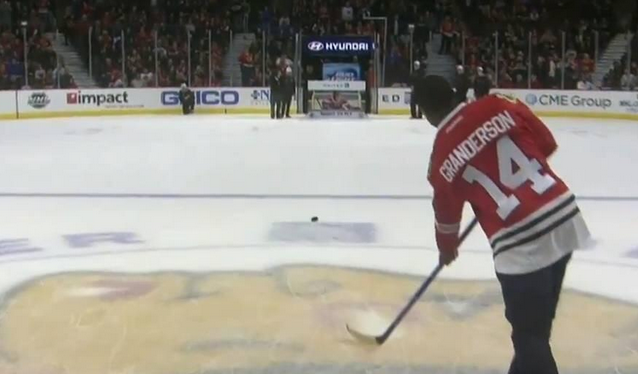 We can not imagine that Curtis Granderson needs them but the outfielder snagged an airline ticket on Wednesday night but scoring a goal during “Shoot the Puck” prior to the Chicago Blackhawks game.

Granderson, 32, is a native of Blue Island, IL and his presence in Chicago will only cause White Sox and Cubs fans to jump to conclusions.

Grandrson was given a qualifying offer by the New York Yankees worth $14.1 million today which he reportedly will consider as he weighs his options.

“It’s definitely something you’ve got to think about and I appreciate the Yankees extending that offer to me,” Granderson said Tuesday morning during an appearance on MLB Network Radio on SiriusXM.

“You definitely got to continue to weigh all your options to see what’s the best fit for you,” Granderson continued. “You know, there are 29 other ballclubs out there and we’re now at a point where every team has the chance to be a contender here in the near future.”