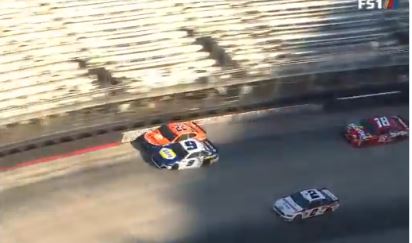 Joey Logano and Chase Elliott’s battle for the lead with three to go ended with neither driver in victory lane or happy at the conclusion of the Food City presents Supermarket Heroes 500 at Bristol Motor Speedway.

WHAT. A. FINISH! Retweet to congratulate Brad @Keselowski on his Bristol win. pic.twitter.com/mMIazXj5qE

The beneficiary of the contact between the two drivers was Brad Keselowski who scored his second win in three races and the 32nd of his career.

Following the race Logano blamed Elliott for wrecking him saying he had to force an apology when the two talked on pit road saying “be a man and take the hit when you’re done with it.”

Elliott said he got lose and questioned if he had a tire going down prior to contact with Logano and said he “would certainly take the blame” before indicating he did not believe a tire was at fault.