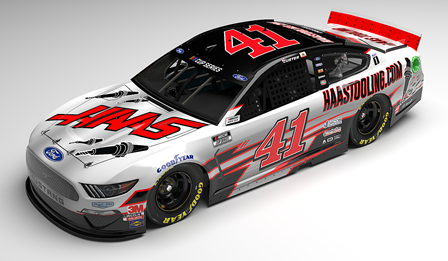 Cole Custer and the No. 41 HaasTooling.com Ford Mustang team for Stewart-Haas Racing (SHR) will make the two-hour drive to Darlington (S.C.) Raceway for Sunday’s 400-mile race. Custer’s Mustang will showcase a new livery that represents Gene Haas’ newest holding, Haas Tooling was launched just weeks ago as a way for CNC machinists to purchase high quality cutting tools at great prices. Haas’ cutting tools will be sold exclusively online at HaasTooling.com and shipped directly to end-users.

After a nine-week shutdown due to the COVID-19 pandemic that prevented large gatherings, the NASCAR Cup Series season resumes Sunday at the track that’s “Too Tough To Tame.” The remaining 2020 schedule is still fluid, but race fans and sports fans alike finally can rejoice with live racing action. While fans will not be allowed in the grandstands due to restrictions, NASCAR’s longtime television partner FOX will do its best to heighten the race action in living rooms across the nation and abroad.

What makes this weekend particularly unique for Custer is that he’s a rookie in NASCAR’s premiere series and will take the green flag on Sunday without ever turning a lap in NASCAR’s top series at the 1.366-mile oval. Even though that will present challenges to the California native, he’s ready. “I think the best thing I can do is learn and figure out as much as I can in the first part of the race and get more aggressive as it goes,” Custer said. “When you don’t have practice, you don’t have the time to learn how much you can push all the lanes and the track in general, so I’ll have to work up to it a little.”

In the NASCAR Xfinity Series at Darlington, the 22-year-old has three starts and managed stellar statistics. He hasn’t started or finished outside the top-10 in the Xfinity Series at the South Carolina track. He has one runner-up finish, as well as a victory, earned last year in the No. 00 Production Alliance Group Ford Mustang after the car that crossed the finish line first was disqualified. “It was a really strange ‘win’ for us,” Custer said. “I ran second there two years in a row and was definitely a little mad because that’s the coolest track you can win at. Then we ended up winning about an hour after the race was over. It’s definitely not the same as a real win, but we can take a little pride in it that we could go there and compete for wins with the best of them.”

During the quarantine period, the young driver figured out that do-it-yourself projects are not as easy as they’re made to seem on popular television shows. Custer spent several days working on a seemingly easy project of installing a brick pathway from his garage to his house. He chronicled the effort via his Twitter account, but the project is at a standstill after he felt like he needs to call in professional help. “I’ve reached a point of where it’s beyond my abilities,” Custer said. “I got everything dug up and got the stuff I need, but I need to move the edging around so I can fit the pavers and I really don’t trust myself with that project.” Additionally, he released another episode of Cole Custer’s Cold Custard Review with his first store-bought custard review and a homemade version.

The Ford driver participated in three eNASCAR Pro Invitational Series iRaces – Talladega, Dover and North Wilkesboro (N.C.) Raceway. The virtual races have aired on FOX and provided an outlet for drivers to participate in at some form of racing from home.

SHR has 35 starts at Darlington and one victory earned by No. 4 driver Kevin Harvick in 2014. In total, the Kannapolis-based Ford team has 10 top-fives and 18 top-10s in the Cup Series at the historic track.