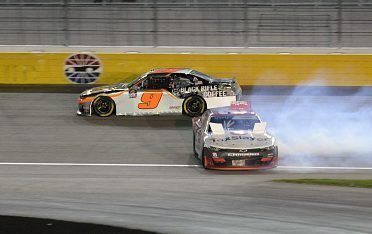 Last weekend at Las Vegas, Noah Gragson driving the No. 9 Chevrolet made contact with Myatt Snider sending him for a spin.

Appearing on SiriusXM on Wednesday, Snider spoke about the incident in detail.

Snider discussed the incident Wednesday on SiriusXM NASCAR Radio’s “Tradin’ Paint” and where things stand between the two drivers.

“It, to me, just seemed like some impatience on Noah’s part,” Snider said. “I had gotten into a rut and was trying to figure out how to make the car faster but at that point in time, I didn’t. So he was running me down and he actually had a run on me going to the frontstretch.

“So I was, ‘Okay, he’s going to go by me.’ Then I felt a little yoink in the left rear quarter and around I was going. It’s kind of unfortunate it had to go down that way, that’s not racing to me. But I’m a big believer in karma and what goes around, comes around. We’ll be performing at our best over these next couple of weeks and I’m not worried about it.”

The two drivers have not talked since Sunday’s race and is prepared to return the favor if necessary.

“I’m the kind of guy that believes in racing people how you’re raced,” Snider said. “I’m not going to take any kind of stuff like that. If (Gragson) wants to send that kind of message early, then game on.”

Gragson had a different take on the incident.

“It was just some hard racing between the two of us and we got into each other, so I think we both can look forward to the next couple of races and stay out of each other’s ways,” Gragson said. “I think we’re both at fault. It was a long race, none of us were going to give and we’re going to go on to California and run as good as possible and do as good as we can.”

Gragson attempted to speak with Snider following the race but video showed the latter walking away.

“I told (Myatt) let’s play rock, paper, scissors,” Gragson quipped in part on SiriusXM NASCAR Radio. “I went with rock and he still hasn’t gotten back to me if he wants scissors, paper or rock.”

Gragson began the season with a win at Daytona and finished fourth at Las Vegas. Snider won the Daytona pole but had to settle for a 33rd place finish and a 16th place run at Las Vegas. Snider is driving part-time in the No. 21 car at Richard Childress Racing but will be racing at Auto Club Speedway for RSS Racing.