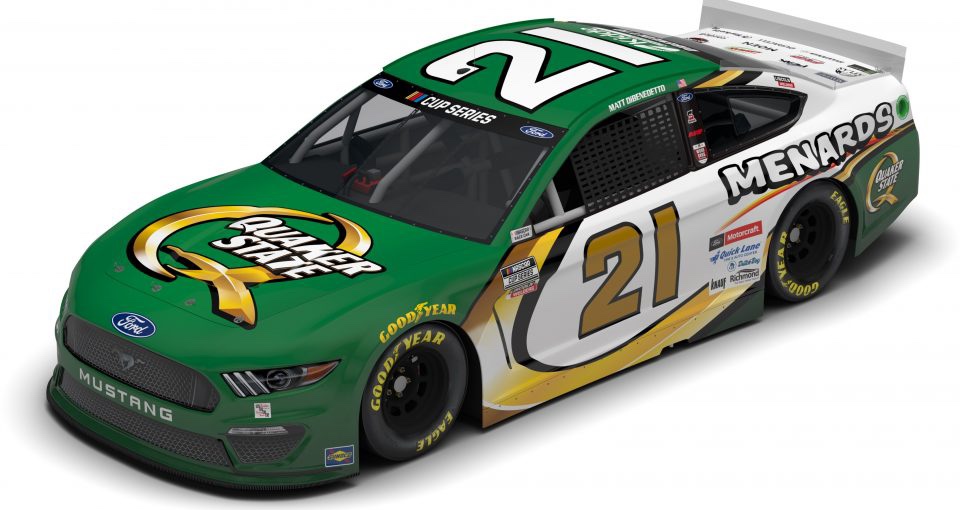 Matt DiBenedetto and his Wood Brothers team, fresh off a second-place finish at Las Vegas Motor Speedway on Sunday, are headed to Auto Club Speedway with their iconic No. 21 Mustang carrying the green colors of Menards and Quaker State for the first time this season.

And DiBenedetto, who enters the weekend 10thin the Cup Series point standings, carries with him the confidence that comes from having a fast Ford at Las Vegas.

“Daytona is really its own animal,” DiBenedetto said. “Las Vegas was our first of what I’d call a normal weekend and a pretty good indicator of how we’ll be going forward.”
He said there was good communication between him, crew chief Greg Erwin, spotter Doug Campbell and the rest of the Menards team at Las Vegas throughout the weekend.

“We kept getting our cars better and got ourselves a second-place finish,” he said.

That result, coupled with his Daytona finish of 19th, put him in the top 10 in points for the first time in his Cup career.

“It’s always important to get a good points position firing off,” he said.

DiBenedetto, who scored his Cup-career-first top 10 on an intermediate track at Las Vegas, said the speed of his Menards Mustang had a lot to do with that and should be a plus this weekend as well.

“With my previous teams, my strength was usually on the short tracks and road courses,” he said “Now we have speed every week.”

The Grass Valley, Calif., native will be racing on one of his home-state tracks this weekend and says he enjoys driving on the D-shaped, two-mile track that has been hosting races since 1997.

“It’s a big track, but it’s unique in that there’s a lot of sliding around,” he said. “It’s more fun to drive when the lap times fall off.”

He said the back straightaway also is different than other tracks.

“Turns Three and Four are bumpy, but the back straightaway is like going over jumps,” he said.