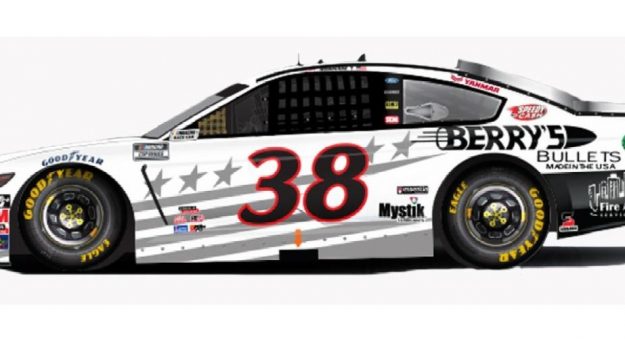 Berry’s Bullets, a producer of superior bullets for shooters everywhere, has partnered with Front Row Motorsports and John Hunter Nemechek’s No. 38 Ford Mustang for the NASCAR Cup Series race at Las Vegas Motor Speedway this weekend.

Based in St. George, Utah, Berry’s provides superior plated bullets and other reloading and shooting accessories. The family-owned and operated business holds its core beliefs of faith, family, and hard work to the highest standard. Decades of experience in the shooting industry make Berry’s Bullets the superior choice for shooting and reloading needs. Berry’s Bullets has also been a longtime supporter of Nemechek, serving as a primary partner in several NASCAR Gander RV and Outdoors Truck Series and NASCAR Xfinity Series races.

“We love how well John Hunter’s personality and performance on the track fits in with our brand,” said Tony Berry, Owner of Berry’s. “We strive to provide exceptional quality and customer service, while always prioritizing faith and family. John Hunter also has very strong ties in his faith and family, and we are excited to continue supporting him in his rookie year at the Cup Level.”

“I’m really looking forward to heading to Las Vegas this weekend with Berry’s Bullets on my No. 38 Ford Mustang,” said Nemechek. “They’ve been such a great supporter for me in my career and we’ve come really close to winning with them at this track in the past. I’m excited to give it another shot this weekend. We’re coming off of a really strong run with an 11th place finish in the Daytona 500. It’s cool to be the highest-place finisher among the rookie class in my first race as a full-time Cup Series driver. I’m hoping we can carry that momentum over to our mile-and-a-half program with the team at Front Row Motorsports.”

The No. 38 Berry’s Bullets Ford Mustang will make its debut at Las Vegas Motor Speedway on Friday, Feb. 21 for practice. The NASCAR Cup Series race at Las Vegas will air Sunday, Feb. 23 at 3:30 p.m. on FOX and PRN.